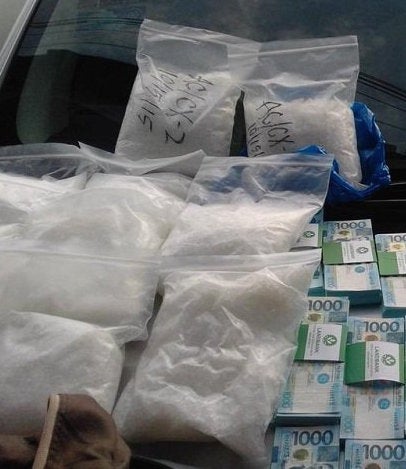 An earlier raid in Maguindanao also netted the wife of a suspected drug lord.

Also seized during the 4 a.m. sweep on Purok Krislam in Barangay Poblacion in Kabacan were illegal drugs estimated to be worth over P1 million, Supt. Romeo Galgo, the spokesperson of the Central Mindanao Police Office said.

Galgo said the operation was carried out by policemen, elements of the Philippine Drug Enforcement Agency (PDEA), and soldiers, who were backed by nine warrants.

Cordero said aside from suspected shabu, also seized were various brands of motorcycles after law enforcers found out that these had no registration documents.

The arrested suspects have been undergoing interrogation and those caught with illegal substance and other contraband would be charged, Cordero said.

The Krislam raid took place a few hours after anti-drug agents raided the house of a suspected drug lord in Talitay, Maguindanao.

But Buisan’s wife, Arbaya, was taken into custody after the raiding team found in her possession sachets of suspected shabu.

Babang said they also confiscated more than P20,000 in cash proceeds from drug deals, bank receipts showing more than P100,000 in remittances to shabu suppliers, whom he did not name.

Talitay had been publicly identified by President Rodrigo Duterte as among havens of illegal drugs in Maguindanao and named its mayor, Montassir Sabal, as among the country’s biggest “narcopoliticians.” Sabal, who denied the charges, went into hiding after Duterte made public his name as a drug lord.  SFM