Trump moves on climate, no word yet on Paris accord | Inquirer News
Close
menu
search

Trump moves on climate, no word yet on Paris accord 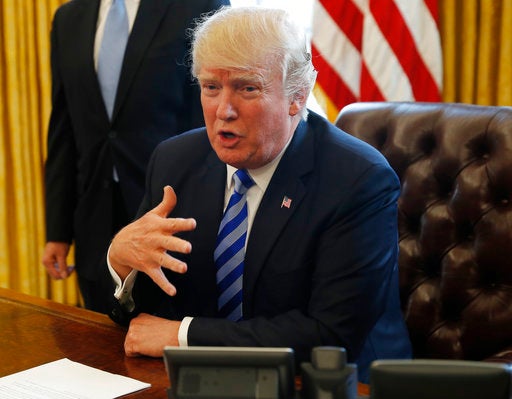 WASHINGTON—President Donald Trump took action Tuesday to curb rules that underpin American emissions targets, making it clear climate change was not a priority, but said nothing about the 2015 Paris accord.

The White House has said discussions on the deal, which has been signed by more than 190 countries including the United States, are still under way.

Here are excerpts from an interview with Todd Stern, who led US climate negotiators from 2009-2016.

What do you think the impact would be of the United States pulling out of the Paris accord?

It would absolutely tarnish America’s image. I think this would be a damaging thing that would be viewed very negatively all over the world.

There would be collateral damage beyond climate change. We saw a dry run of this kind of thing back in 2001 when President (George W.) Bush walked away from Kyoto.

Kyoto was in fact a good effort but a very flawed agreement.

But even so when president Bush, soon after he took office, said the US is not going to participate in the Kyoto process, I think it hurt the US a lot diplomatically.

Even if the Trump administration wants to pretend for the time being that climate change is not a big deal, people all over the world think it is a really big deal.

Given the talk coming from the US administration, does it make sense for the United States to back out?

There is a debate internally between people who say let’s be faithful to what Donald Trump said during the campaign and walk away and those who, like (Secretary of State Rex) Tillerson, say let’s keep a seat at the table.

Other than to just make an ideological point, I don’t see any reason to do that.

There is not much percentage in walking away and not keeping a seat at the table.

I hope they are reaching out to the business community because if they are, they are going to hear business leaders saying you should stay in the agreement.

If the United States drops its greenhouse gas emissions targets, would it make sense to remain in the accord?

I have a very negative view of the executive order signed today, I could not disagree more with it but I don’t agree with the idea that, then, we might as well pull out of the Paris agreement.

I think it still matters for the US to be a part of the Paris agreement.

It’s not as if everything grinds to a halt. What will change is certain important incentives being provided by the federal government, and those matter, but it’s not going to stop everything in its track.

There are a bunch of States that are quite aggressive in what they are doing and there a lot cities as well and there are a lot of things going on in the real economy so to speak that is driving the development and dissemination of clean energy faster and further than anybody would have imagined.