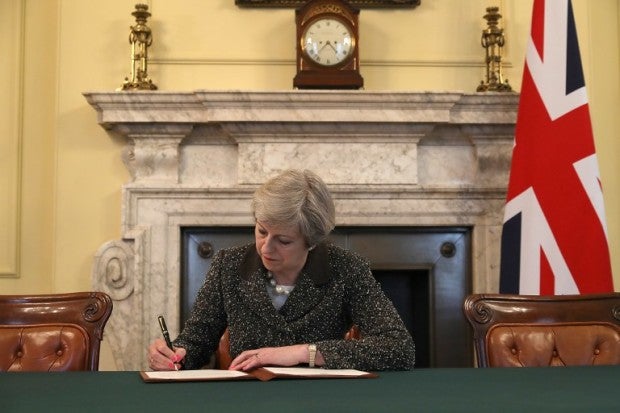 Britain’s Prime Minister Theresa May, signs the official letter to European Council President Donald Tusk, invoking Article 50 and signalling the United Kingdom’s intention to leave the EU, in the cabinet office inside 10 Downing Street on March 28, 2017. Britain’s formal departure notification on Wednesday opens up a two-year negotiating window before Britain actually leaves the bloc in 2019. AFP

LONDON, United Kingdom — British Prime Minister Theresa May on Tuesday signed the historic letter that will launch Brexit, a photo released by her office showed, as she called for unity even as Scotland voted for a new independence referendum.

The British government will on Wednesday deliver the letter to European Union President Donald Tusk, formally notifying him of Britain’s intention to leave the bloc after 44 years of membership.

Addressing parliament on Wednesday, May will acknowledge that the June vote for Brexit had been divisive, but will express hope “that we are no longer defined by the vote we cast, but by our determination to make a success of the result”.

READ: In the know: What is ‘Brexit’?| Dutch leader says Brexit puts Britain in deep trouble

“We are one great union of people and nations with a proud history and a bright future.  And, now that the decision has been made to leave the EU, it is time to come together,” she will say, according to the speech published in advance by Downing Street.

Her comments will come just hours after the semi-autonomous Scottish Parliament backed First Minister Nicola Sturgeon’s call for a fresh independence vote in protest at Brexit.

May has said that “now is not the time” for Scotland to hold a second referendum, but Scottish lawmakers ignored her appeals, supporting the motion by 69 votes to 59.

Sturgeon is now expected to make a formal request for a referendum, which she says could take place by spring 2019 — before Brexit is complete, to allow Scotland to maintain its ties with the EU.

She needs approval from the British government, which repeated Tuesday that a vote on this timetable was “not appropriate” — although it has not ruled out the prospect of a later referendum.

“The mandate for a referendum is beyond question, and it would be democratically indefensible — and utterly unsustainable — to attempt to stand in the way of it,” Sturgeon said.

A few hours after the Scottish vote, Downing Street released a photograph of May signing the letter that will trigger Article 50 of the EU’s Lisbon Treaty, which starts the two-year Brexit process.

Tim Barrow, Britain’s ambassador to the EU, will deliver the letter by hand to Tusk around 1130 GMT on Wednesday — beginning the countdown to Brexit.

Ahead of the letter being delivered, May on Tuesday evening made separate phone calls to Tusk, European Commission President Jean-Claude Juncker, and German Chancellor Angela Merkel.

“They also agreed on the importance of entering into negotiations in a constructive and positive spirit, and of ensuring a smooth and orderly exit process,” Downing Street said.

Scotland voted by 55 percent in 2014 to reject independence, but Sturgeon’s Scottish National Party (SNP) has said a second referendum is now needed to avoid Scotland being forced out of the EU “against its will”.

Both Scotland and Northern Ireland voted to remain in the EU, but they were outnumbered by voters in England and Wales who backed Brexit.

Most recent polls show support for Scottish independence is high — the annual ScotCen survey put it at a record 46 percent — but a majority are still opposed.

Sturgeon and May met in Scotland on Monday, with the prime minister describing the four nations of the United Kingdom as an “unstoppable force”.

But in addition to Scotland, her government is trying to prevent the collapse of the devolved government in Northern Ireland.

The power-sharing arrangement between the Democratic Unionist Party and Irish nationalists Sinn Fein collapsed in January, prompting a snap election.

Three weeks on, both sides are still deadlocked and although the British government extended Monday’s deadline for talks,  the prospect of a fresh election — or even the imposition of direct rule from London — now looms.

Ensuring that the province’s hard-won peace is not upset by Brexit, and that there is no reintroduction of a hard border with the Republic of Ireland, is a priority for both Britain and the EU.

May repeated on Tuesday that she will seek the best deal for all of Britain in her negotiations with Brussels — including for EU nationals living in her country.

But her plan, particularly her intention to leave Europe’s single market in order to cut immigration, has failed to convince the SNP.

The economic uncertainty of an independent Scotland was a factor in the 2014 referendum, but Sturgeon has warned that Brexit could cost Scotland tens of thousands of jobs.

“We know that Brexit threatens a hugely damaging and uncertain future for Scotland,” she said Tuesday.