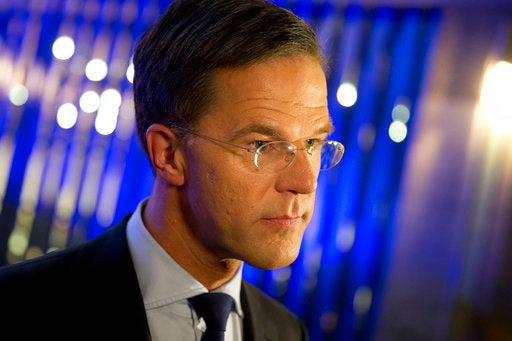 Dutch Prime Minister Mark Rutte answers questions after the closing debate at parliament in The Hague, Netherlands, Tuesday, March 14, 2017. Amid unprecedented international attention, the Dutch go to the polls Wednesday in a parliamentary election that is seen as a bellwether for the future of populism in a year of crucial votes in Europe. AP Photo

THE HAGUE, Netherlands— Dutch Prime Minister Mark Rutte on Tuesday questioned British optimism that departing the European Union will lead to a brighter future, saying the United Kingdom could be in for “potentially irreparable harm.”

In unusually frank terms toward a longstanding allied nation, Rutte said Britain’s economic growth has remained good since last year’s Brexit vote only because the pound has sunk. “If you look below the surface, the English economy suffers potentially irreparable harm because of their Brexit,” he warned.

Rutte said the Brexit vote has already led to a “tectonic shift” within the international banking community that still has London as one of its biggest global hubs. He said American banks are seeking to get out of the City of London and have shown a keen interest in Amsterdam as a new hub.

“They want to leave London, so they mainly think about Frankfurt and Amsterdam,” he said.

British Prime Minister Theresa May is expected to officially launch divorce proceedings with the EU by the end of the month, setting off two years of negotiations to disentangle itself from its 27 partners. Britain also needs to negotiate a new trade agreement with the bloc.

“I don’t see right away how they can negotiate a deal with Europe in the future. It will never be as good as what they have now,” Rutte said, adding the trade relationship with the continent “is getting really in danger.”

Rutte also didn’t shy away from wading into British politics. He noted Scottish leaders want to hold another vote on independence just as the UK is negotiating its exit from the EU. And, he added, by leaving the EU, the United Kingdom — and Northern Ireland — could get a hard border with EU member Ireland on the politically sensitive island.

“The political system in London is shaking on its foundations. You don’t want that,” said Rutte, comparing Brexit to suggestions from some of his political rivals that the Netherlands leave the EU, too.