UK parliament okays Brexit as Scotland bids to break away 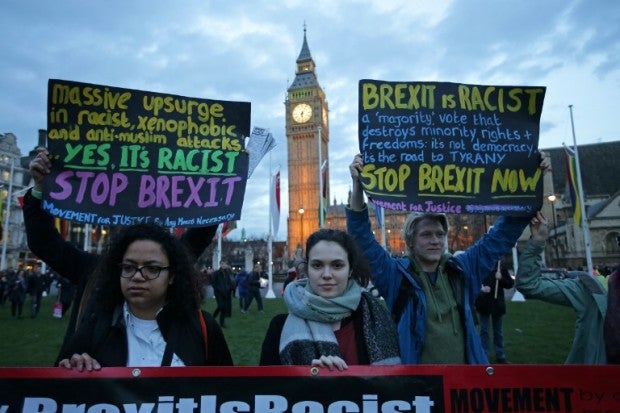 Protesters hold up anti-Brexit placards as they take part in a protest in support of an amendment to guarantee legal status of EU citizens, outside the Houses of Parliament in London on March 13, 2017. British Prime Minister Theresa May feared parliament would stand in her way in implementing Brexit but the opposition crumbled and she prepares to open negotiations with the wind in her sails. AFP

LONDON, United Kingdom — Parliament gave its approval Monday for Prime Minister Theresa May to start Britain’s withdrawal from the European Union, even as Scotland signaled its opposition by announcing plans for a fresh independence vote.

The House of Lords rejected a last-ditch attempt to amend a bill empowering May to begin Brexit, paving the way for it to become law as early as Tuesday.

The prime minister could then trigger Article 50 of the EU’s Lisbon Treaty at any time, starting two years of talks that will end with Britain becoming the first country to leave the bloc.

READ: In the know: What is ‘Brexit’? | Britain ‘will allow EU citizens to stay’ after Brexit

May’s spokesman sought to play down speculation that she would send her notification letter to the European Council on Tuesday, when the bill is expected to receive royal assent from Queen Elizabeth II.

“We have been clear that the prime minister will trigger Article 50 by the end of March,” her spokesman said ahead of the vote, heavily emphasizing the word “end”.

But the prospect of an imminent start to Brexit was enough to push the nationalist devolved government in Scotland into calling for a new independence referendum.

May has said Britain will leave Europe’s single market in order to cut immigration, a move that the Scottish National Party (SNP) in power in Edinburgh has warned would be highly damaging to jobs and growth.

SNP First Minister Nicola Sturgeon has said since the June referendum vote for Brexit that Scotland, where a majority wanted to stay in the EU, sought a different future.

On Monday she made good on her warning, promising to give Scotland “a choice at the end of this process” by early 2019 — before Britain leaves the EU.

The European Commission, however, quickly responded saying that Scotland would have to reapply to join the EU rather than inheriting Britain’s membership.

May has the power to block the vote and said that another referendum, after Scots voted by 55 percent to reject independence in 2014, would only cause “uncertainty and division”.

But Sturgeon’s call pushes to center stage one of the prime minister’s biggest concerns about Brexit — that it could lead to the break-up of the United Kingdom — as she prepares to fire the starting gun.

The other 27 European leaders are prepared for Britain to trigger Article 50, which begins a two-year countdown to Brexit, this week.

However, speculation is growing that it may now be delayed until after a March 25 summit in Rome to mark the EU’s 60th birthday — timing that would likely be welcomed in Brussels.

Once May has notified the EU of her decision by letter, the bloc will take just 48 hours to issue its first draft proposal for the negotiations, with a follow-up meeting planned on April 6.

The actual talks are not expected to begin for months.

The bill empowering May to begin Brexit was forced on the government by a Supreme Court ruling and was held up when the House of Lords voted for amendments demanding guarantees for EU nationals’ rights and a parliamentary vote on the final withdrawal deal.

Brexit minister David Davis successfully urged MPs to overturn the changes earlier Monday, saying: “We will not enter the negotiations with our hands tied.”

The House of Lords then conceded, passing the bill unamended late on Monday.

The Lords amendment demanding protections for more than three million Europeans living in Britain was defeated by 335 votes to 287 by MPs — prompting shouts of “shame on you” from protesters outside.

Around 150 people had gathered to urge MPs to back the change, including Karin Templin, a 39-year-old architect who was born in the US but is now British.

“I’m appalled at the UK government, at this stupid ridiculous game that means they won’t guarantee the rights of everybody who wants to stay in their home and in their jobs. I’m disgusted,” she said.

The other amendment that was overturned would have given parliament the right to decide whether to accept the final Brexit deal.

May has promised lawmakers a vote on the deal but only if she accepts it — insisting her ability to walk away will strengthen her hand in negotiations. CBB