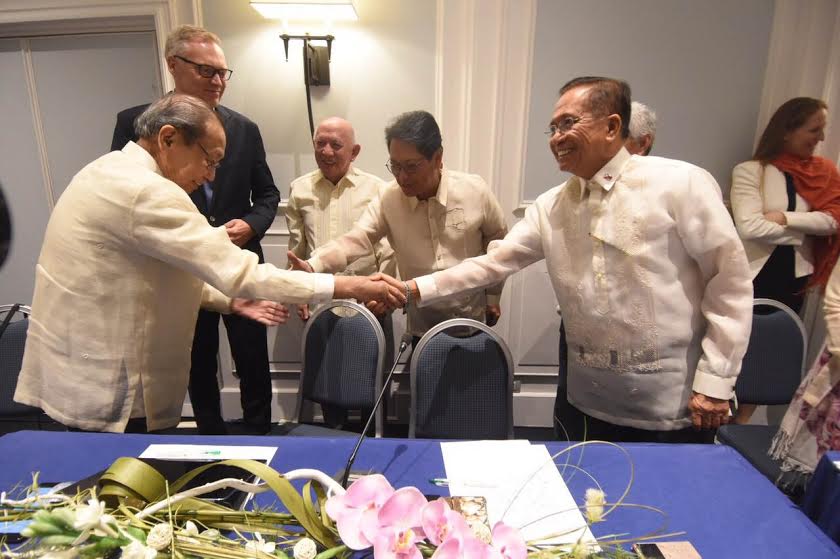 Presidential Peace Adviser Jesus Dureza (right), Labor Secretary Silvestre Bello III (second from right) , shake hands with Communist Party of the Philippines founder Jose Maria Sison (left) and Fidel Agcaoili (center) of the National Democratic Front of the Philippines after they sign an agreement in Rome, Italy, on Jan. 25, 2017, that would be the basis for future talks on socio-economic reforms. (Photo release from the Office of the Presidential Adviser on the Peace Process)

DAVAO CITY – The National Democratic Front of the Philippines (NDFP) wants free land distribution and rural industrialization as part of the social and economic reform package it wants the government to implement to end the decades-old poverty hounding rural folk.

In the draft Comprehensive Agreement on Social and Economic Reforms (Caser), which the NDFP will be tackling with Philippine government negotiators during next month’s resumption of talks in The Netherlands, communist rebels said “the distribution of land to the tillers for free” would be a vital component of agrarian reform that would dismantle and end land monopoly in the countryside.

The NDFP also wanted the government to implement rural industrialization and rural development as integral parts of the agrarian reform program.

Under rural industrialization and development, the NDF seeks for “the provision of more farm technicians, agricultural credit to the tillers, post-harvest facilities, marketing agencies, irrigation systems, and farm-to-market roads.”

It also seeks to prohibit the use of hazardous and toxic wastes and technologies, and other ecologically destructive practices.

“No other document has authoritatively articulated concrete solutions to the long-standing economic, social, and ecological crises in the Philippines,” environmental group Kalikasan People’s Network for the Environment said.

Anakpawis Representative Ariel Casilao said the peasant sector and local government units should rally behind the NDFP draft of Caser “as it sincerely pushes for the welfare of poor peasants in the country, as well as, genuine development in the countryside.”

Casilao said he believed the NDFP document would open fundamental reforms in the country and address the root causes of the armed conflict involving the New People’s Army (NPA).

“Majority of the NPA are farmers who were victimized by displacement, feudal and semi-feudal forms of exploitation, and were driven to bear arms to fight oppression and exploitation,” Casilao said.

Presidential Peace Adviser Jesus Dureza said there was no magic formula for peace but it could be achieved if everyone would participate in the negotiations.