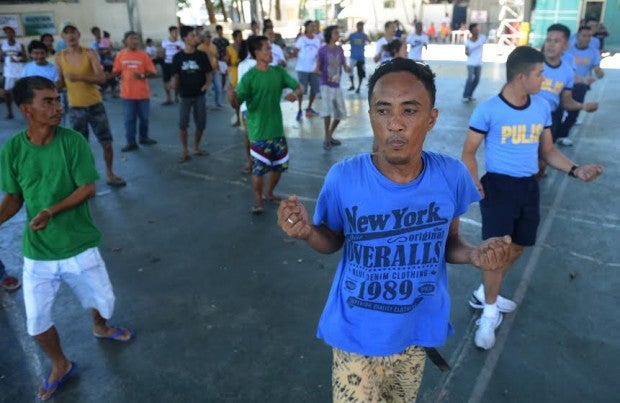 SAN PEDRO CITY, Laguna — The renewed anti-drug campaign in this city came not only with a morning exercise but also free food for former drug users.

In Barangay San Vicente, 55 drug users and pushers who surrendered to the government’s “Oplan Double Barrel, Reloaded” attended Sunday what would be a weekly session of counseling and Zumba, a fitness exercise, as part of the government’s effort to help their recovery.

Afterwards, they shared a meal of rice and Chicken Afritada in a boodle-fight or Army-styled lunch, and was each given a kilo of rice as take home.

“In our experience, it’s really hard to fight (the drug problem). Since the resumption of the Oplan Double Barrel, we reviewed the lists (of those who had surrendered) and called back each one of them,” said Don Solidum, vice chairman of San Vicente’s Barangay Anti-Drug Abuse Council. “There are still a lot (of users and pushers) here.”

In San Vicente, with a population of 100,000, he said about 450 surrendered during the first part of Tokhang, “but only about 30 percent had actually changed their ways.”

“The rest went back to using or selling drugs because it had become their way of making a living,” he said.

A 50-year-old woman, one of the eight women undergoing rehabilitation during Sunday’s session, said she started using illegal drugs in 1990. Her brother was arrested for drug use in 2015, prompting her surrender to the local authorities last year.

The woman said a kilo of free rice “would be a big help” to them since she only earned a little from taking in laundry and offering services as a house helper since her surrender.

Solidum said they wanted their campaign sustained, dubbing it as their own “Oplan Kalinga (care).”

“They need to find jobs so later on, we’ll do livelihood trainings like carpentry for the men, and we plan to give away sewing machines for the women,” he said.  SFM/rga