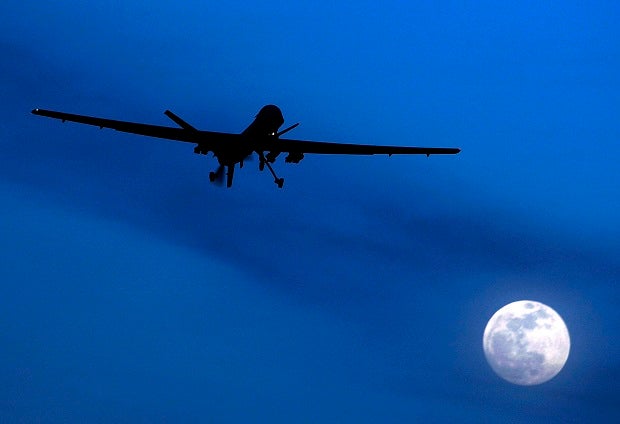 In this Jan. 31, 2010, file photo, an unmanned U.S. Predator drone flies over Kandahar Air Field, southern Afghanistan on a moonlit night. The US military said Saturday, March 25, 2017, that one of its drones killed the senior Al Qaeda commander Qari Yasin in Afghanistan. AP FILE

WASHINGTON — A US drone strike in eastern Afghanistan on March 19 killed the senior Al-Qaeda military commander Qari Yasin, who has been linked to numerous attacks in his native Pakistan, the US military confirmed on Saturday.

“The death of Qari Yasin is evidence that terrorists who defame Islam and deliberately target innocent people will not escape justice,” Defense Secretary Jim Mattis said in a statement.

A native of the Pakistani region of Balochistan who has ties to the Tehrik-e-Taliban group, Yasin was accused of plotting the September 20, 2008, bombing on a Marriott Hotel in Islamabad that killed dozens of people, including two US servicemembers.

He was also said to have been behind a 2009 attack on a bus carrying the Sri Lankan cricket team in Lahore that killed six Pakistani police officers and two civilians, and wounded six members of the team.

Yasin was killed during an air strike in Paktika province, which borders Pakistan, the Pentagon said.

Afghanistan has long accused Pakistan of providing safe haven to the Afghan Taliban, part of an ongoing dispute with both countries trading allegations.

Taliban fighters on Thursday captured Afghanistan’s strategic southern district of Sangin, where US and British forces had suffered heavy casualties before it was handed over to Afghan personnel.

The Taliban effectively control or contest 10 of 14 districts in Helmand, the deadliest province for British and US troops over the past decade, blighted by a huge opium harvest that helps fund the insurgency.

The Pentagon has said it would deploy some 300 Marines this spring to Helmand, where American forces had engaged in heated combat until they pulled out in 2014.

The Marines will head to the poppy-growing province this spring to assist a NATO-led mission to train Afghan forces, in the latest sign that foreign forces are increasingly being drawn back into the mounting conflict. CBB/rga