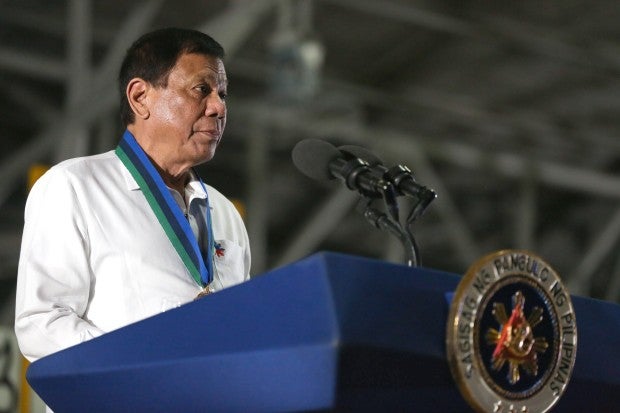 President Rodrigo Duterte will convene the National Security Council and consult the military, the police, and Congress leaders on the government’s response to the communist rebels’ plan to declare a unilateral ceasefire before the end of March.

Though the president, Duterte said, he did not have sole control of his office and would have to get the views of other officials

“There is no such thing as an absolute decision, especially if it involves the interest of the country,” he told reporters in Bukidnon.

One concern was that the ceasefire might not be followed, he said.

“If they don’t follow it, there will just be an aberration in system of talking about peace,” he said.

He would ask the security officials whether or not it would be good to declare a government ceasefire again, he added.

He recalled that he had become angry when members of the New People’s Army attacked soldiers even before the communist rebels’ unilateral ceasefire was terminated. One soldier was even shot more than 70 times, he added.

He reiterated his rejection of the communist rebels’ claim that certain parts of the country were considered their territory, especially since this was being used as an excuse to ambush soldiers.

“I don’t like that,” he said. “That is a pretext to ambush my soldiers. We would have nothing to talk about if that’s the case.”

Every inch of the country belongs to the Republic of the Philippines, he stressed.

He also called on the communist rebels to release all their hostages and to stop their extortion activities.

Duterte also said he would want a ceasefire agreement put in writing, with clear parameters.

Meanwhile, Secretary Jesus Dureza, peace process adviser, is scheduled to meet with the President on Monday to get his guidance before he flies to the Netherlands for the fourth round of peace talks with the National Democratif Front in the first week of April.

Dureza said he would also seek to validate Duterte’s recent public pronouncements concerning the peace negotiations with the communists.

According to Dureza, the President is passionate about peace, and is following his own path on how to achieve it.

“There are certain considerations we have to deal with given the president’s trajectory on how to achieve peace,” Dureza said in a phone interview..“His strategies do not jibe with the pervious road map.”

He said he was optimistic that this new approach would lead to success. But he warned that it would not come overnight.

“It would be piecece by piece. It would not be immediate,” he said. “It has to be one step at a time. We don’t have a magic formula.”

“We will take it one step at a time with clear guidance from the president, which I hope the CPP-NPA will favorably respond to,” he added.

The crafting of a bilateral ceasefire agreement is one of the items on the agenda.

Duterte had earlier said he would want to see a bilateral ceasefire deal before he would release any more detained communist rebels. /atm