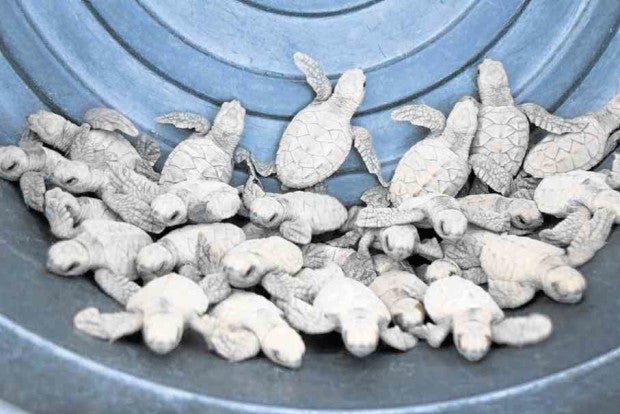 Some of the Hawskbill sea turtles that had been released into the sea after they were hatched on the coast of Punta Dumalag, Davao City, a known nesting site of the turtles. —ARJOY M. CENIZA/CONTRIBUTOR

DAVAO CITY—At least 160 Hawksbill sea turtles had been released to the sea on Tuesday after they were hatched on the coast of Punta Dumalag, Talomo District, a known nesting ground of the turtles.

Hawksbill sea turtles are on the red list of threatened species of the International Union for Conservation of Nature.

Mayor Sara Duterte was guest at the ceremony for
the release of the turtles at Aboitiz Cleanergy Park in Punta Dumalag.

The number of hatchlings released was the largest this year, officials said.

The release of the hatchlings was overseen by the Department of Environment and Natural Resources.