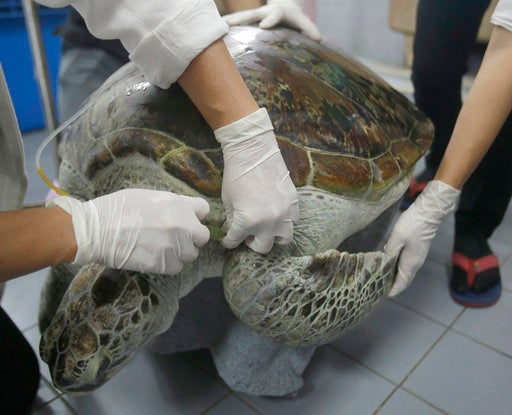 BANGKOK — A 25-year-old sea turtle in Thailand who swallowed nearly a thousand coins tossed by tourists seeking good luck died Tuesday, two weeks after having surgery to remove the coins from its stomach.

The cause of death was blood poisoning from the loose change, said Dr. Achariya Sailasuta, a professor at the veterinary faculty at Bangkok’s Chulalongkorn University.

“She at least had the chance to swim freely and eat happily before she passed,” said Dr. Nantarika Chansue, who removed 5 kilograms (11 pounds) of coins from the turtle’s stomach in an hours-long operation on March 6.

The turtle — nicknamed Bank — appeared to be doing well after the operation, but a checkup Saturday revealed problems with its intestines. Doctors performed a second operation, but Bank never woke up and died Tuesday morning.

Bank lived in a public pond in Chonburi province, about 175 kilometers (110 miles) southeast of Bangkok. The turtle swallowed 915 coins that tourists threw into the pond. Eventually, the money formed a weight that cracked Bank’s shell. JE/rga