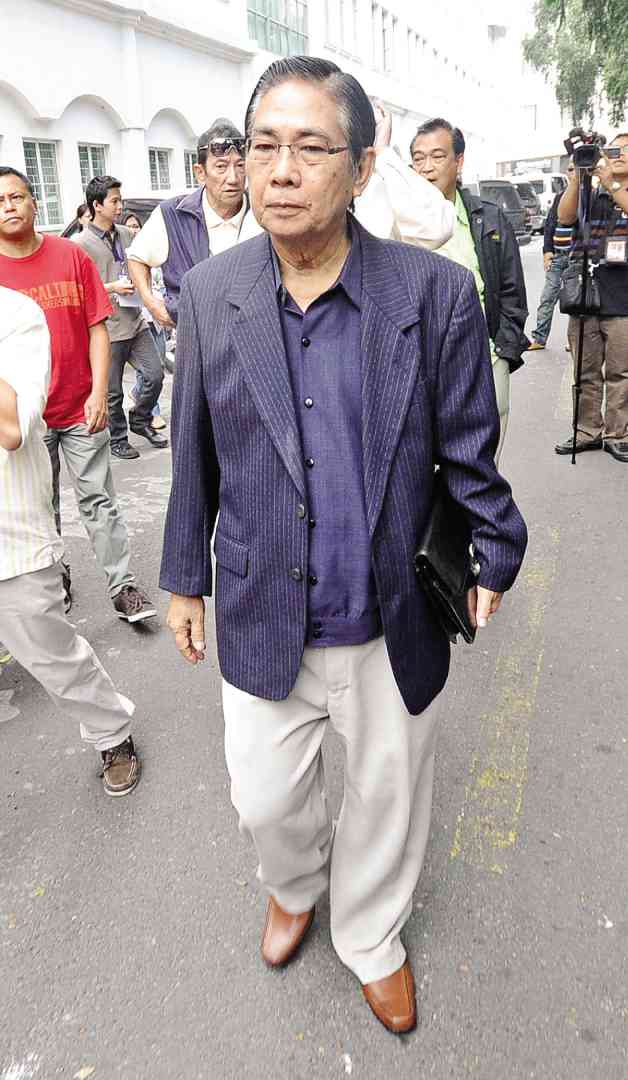 MANILA — Two Marcos loyalists have gotten the ball rolling for the impeachment of Vice-President Leni Robredo, calling her a “termite of the government.”

Oliver Lozano and Melchor Chavez, who were long identified with the late dictator’s party Kilusang Bagong Lipunan, represented themselves as members of Volunteers for Good Government.

Their six-page complaint on late Monday was anchored on the grounds of culpable violation of the Constitution, acts of injustice, and betrayal of public trust arising from Robredo’s video message to the United Nations Commission on Narcotics criticizing the Duterte administration’s bloody war on drugs.

The two sought the endorsement of no less than Speaker Pantaleon Alvarez, who said last week that he has been studying the possibility of seeking Robredo’s ouster, in order to make it an official verified complaint.

“She is the termite of the Government. Her unfaithfulness has extended [sic] to the betrayal of the Public Trust and Culpable Violation of the Constitution,” they wrote Alvarez.

When asked if he was inclined to give his endorsement, Alvarez could not yet give an answer. “I have not seen the draft,” he told the Philippine Daily Inquirer in a text message.

Setting his sights on a sitting vice-president has marked a departure for Lozano, who was known for seeking the impeachment of President Gloria Macapagal-Arroyo five times and President Benigno Aquino III twice.

But, his most prominent client, the late dictator Ferdinand Marcos, is the father of Robredo’s  rival candidate, former Senator Ferdinand “Bongbong” Marcos Jr., who lost by a  margin of 263,473 votes.

“But she betrayed the nation by shaming the nation with her dishonest message to the United Nation [sic],” it added.

Robredo’s legal adviser Ibarra Gutierrez III made light of the complaint: “In view of Attorney Lozano’s unparalleled experience in filing impeachment complaints, I very much look forward to reading it.”

Yet, he also noted: “Both Attorney. Lozano and Mel Chavez are KBL stalwarts, however, so it seems that a line can be drawn between this impeachment complaint and the Marcos camp.”

For his part, Deputy Speaker Romero Federico Quimbo of the Liberal Party said that the chamber “should not spend a single second on this baseless complaint.”

He added that Congress should not allow itself to be used by “these ‘recidivist impeachers’ who trivialize this deeply sacred accountability measure enshrined in our constitution.” Using a local idiom, he said the likes of Lozano have “cheapened” the impeachment process by treating it as worth dalawa-singko (small change).

“It’s a mere scrap of paper that is supported not by any evidence but
by  mere erroneous conclusions of law. Congress will only end up
wasting time better  spent on much needed legislation,” Quimbo said.

The latest challenge against Robredo’s vice-presidency came as no less
than President Duterte chimed in and quipped on Sunday that she seemed
“apurado (in a hurry)” to replace him.

Hours before the impeachment complaint was submitted for endorsement,
vice-presidential spokesperson Georgina Hernandez said that while
Robredo “respects” Duterte’s utterance, she has been more in a hurry
to finish her anti-poverty programs.

“Of course, the President is entitled to say what’s on his mind, but [we] wish he would also look at where it’s coming from,” Hernandez said in Tagalog.

“There’s no such plan and VP Leni is not in a hurry to do anything but finish what we have started for the anti-poverty programs,” she added.

Her video message before the United Nations panel also drew rebuke from the Philippine National Police, itself the government agency at the epicenter of criticism against human rights abuses attending the anti-drug campaign.

But, Gutierrez on Monday afternoon disproved the claim of PNP Director-General Ronald dela Rosa that Robredo did not bother reaching out to the police before airing her criticism about the war on drugs.

He presented a one-page letter dated Jan. 24 and marked received by the PNP Office of the Chief on Jan. 30 and the Department of the Interior and Local Government Office of the Secretary on Jan. 31.

Robredo’s letter raised the concerns of “citizens, sectors, and advocates” during her “visits to Barangays in different Provinces.”

She had sought a copy of pertinent documents relating to Operation Double Barrel, list of suspected drug personalities killed in police operations, list of deaths under investigation, and list of concluded cases.

But Gutierrez said the PNP had not acted on her request for the past two months.