‘Drug user’ swallowed sachets of shabu to evade arrest, but … 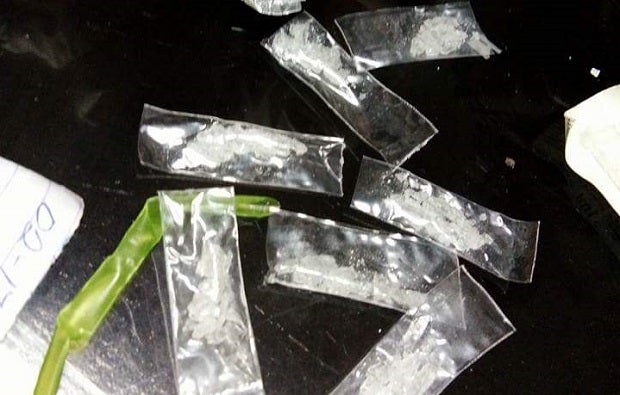 When lawmen arrived in his home due to complaints of domestic disturbance, Edward Mallo, 39, of Barangay Dajay in Surallah, quickly swallowed two sachets in an attempt to deny he was into illegal drugs, Chief Inspector Joel Fuerte said.

Fuerte, Surallah’s police chief, said Mallo forgot he had three other sachets in his pocket that the police eventually recovered.

Fuerte said before the police came, Mallo’s siblings had sought police  assistance after the suspect threatened his brothers and sisters with a knife.

He was under the influence of liquor when he threatened to harm anyone who would cross his path.

In jest, Fuerte said if Mallo had the luxury of time, he would have swallowed all the five sachets of shabu.

Fuerte said more than 2,000 drug personalities in the town have voluntarily showed up to the police office since July last year but many have returned to illegal drug activities.  SFM

Read Next
Marine soldier killed, 8 hurt in Sultan Kudarat ambush by NPA
EDITORS' PICK
Cebu City closes its borders
BREAKING: 1,075 people in PH has coronavirus disease – DOH
Style and music journeys with Claudia Barretto
DILG to stranded workers: ‘Stay where you are’ until Luzon-wide quarantine is over
UP-PGH wards for COVID-19 patients finished in 5 days
IATF: Food firms to operate with 50% of workforce during Luzon quarantine
MOST READ
Pacquiao to seek probe on leaked private letter from Barangay Dasmariñas
Processing and release of 2020 UPCAT results suspended due to ECQ
Tootsy Angara bares neighbor wanted them out of village
593 health volunteers sign up to fight COVID-19, says DOH
Don't miss out on the latest news and information.