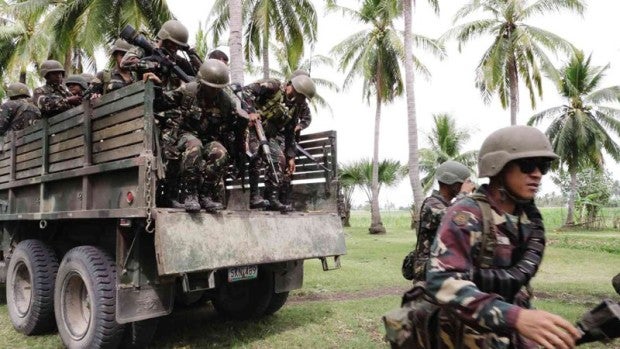 ZAMBOANGA CITY — The military is tight-lipped over another clash in which two children were caught in the crossfire in Tongkil town in Sulu on March 14.

The Western Mindanao Command declined to comment on the wounding of a 5-year old boy and a 13-year old girl during a clash between soldiers and Abu Sayyaf bandits in Tongkil.

“They suffered bullet wounds so we immediately investigated this knowing that they are civilians from Sulu,” he said.

“At first, we thought there were wounded Abu Sayyaf, until we made our own investigation,” Asdai said.

“They were caught in the middle of a crossfire. The guardian of the two children said there was a military encounter and the bandits fled toward their direction. Pursuing government troopers ran in the direction of the bandits thus hitting the children,” he added.

Military officials refused to comment on the skirmish, but the Joint Task Force Sulu’s Facebook account said an Abu Sayyaf sub-leader, a certain Basing, was killed in Barangay Bangalao on March 14.

There was no mention of children being wounded.

Col. Cirilito Sobejana, commander of Joint Task Force Sulu (JTFS), in a statement posted on Facebook, lauded the units who were able to kill Basing.

“Let me reiterate that JTFS is doing our best effort to protect civilians from the threat of terrorist ASG and so we urge civilians not to coddle terrorist ASG but to inform the authority about their location,” Sobejana said.

In press briefing on Monday afternoon, Senior Supt. Luisito Magnaye, the city police chief, said the wounded were “children of the Abu Sayyaf.”

On March 8, two children were killed in an operation against the Abu Sayyaf in Tabuan Lasa town in Basilan.

“I feel very bad until now. I am really very sorry over the two. They were caught in the crossfire,” Galvez said.

The main target in the Tabuan Lasa raid was Mubin Kulin alias Mulawin, a cousin of Abu Sayyaf leader Isnilon Hapilon and who was also responsible for several kidnapping.

Read Next
Isabela couple seeks help for newly-born conjoined twins
EDITORS' PICK
Beyond the Chocolate Hills: A farm-to-table, heritage culinary adventure of Bohol
MyCitiHomes premiers PH’s first 3-star certified BERDE District residential development
‘Crash Landing on You’ couple confirms pregnancy
Enrile contracts COVID-19: ‘To my critics and enemies, I am not going to die yet’
Metro Manila’s COVID-19 positivity rate jumps from 3.9% to 5.9% — OCTA
House energy committee chair Arroyo bats for cheap electricity
MOST READ
Enrile contracts COVID and snipes at critics, foes: ‘I am not going to die yet’
Duterte: It was correct for Bongbong Marcos to ‘decline’ presidential debates
Russia steps up missile strikes on Ukraine as G7 leaders gather
PH firm partners with US corporation to set up weapons assembly in Bataan
Don't miss out on the latest news and information.