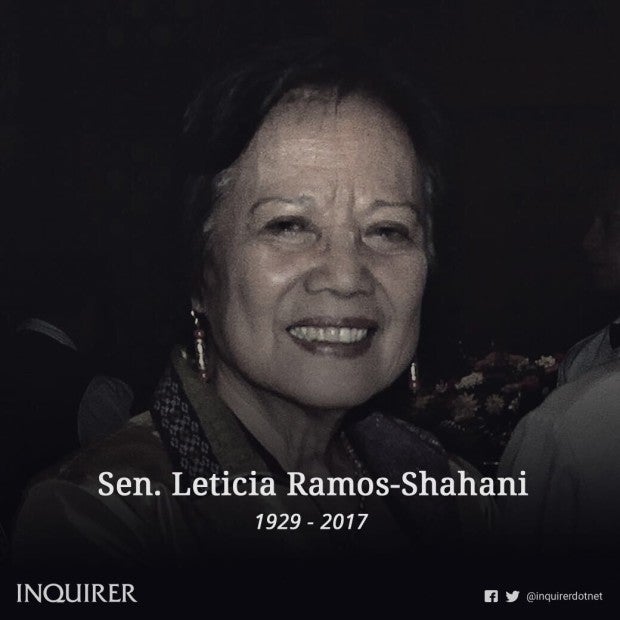 Former senator Leticia Ramos-Shahani, 87,  passed away on Monday, according to her family.

Her daughter Lila posted on Monday morning that Shahani passed away at 2:40 a.m.

“Bereft and full of grief, but still strangely peaceful in the knowledge that she is now free from all suffering,” Lila Shahani posted on Facebook.

In an interview with CNN Philippines, Lila said her mother had stage 4 colon cancer.

“She carried on very well, at least for two years and underwent chemotherapy and stem cell therapy,” she said. However, the former senator developed infections and succumbed to pneumonia, which later developed into sepsis.

Lila said Shahani was admitted to the intensive care unit of the St. Luke’s Hospital in Taguig City. She passed away after falling into a coma and having very low blood pressure.

Shahani, who was the sister of former president Fidel V. Ramos, had an extensive career in government.

She was in the foreign service for 20 years and served as the United Nations Secretary General for Social Development and Humanitarian Affairs. She became the Philippine ambassador to Australia, Romania, Hungary and West Germany before she was appointed Undersecretary of Foreign Affairs and Chairperson of the National Commission on Women.

She won as senator in the 1987 elections and chaired the committees on foreign affairs, education, culture and arts, agriculture and appointments.

She has three children with the late Ranjee Shahani, a former professor and writer. KS