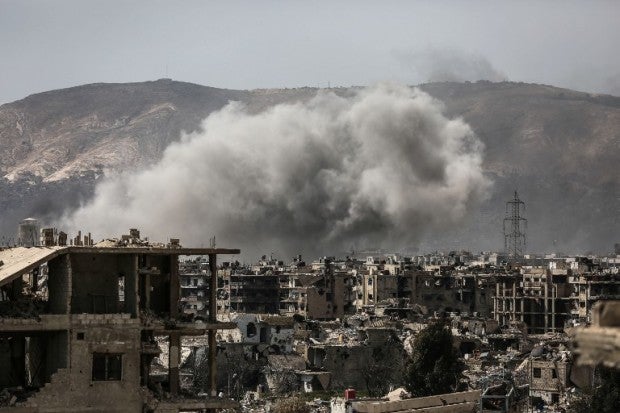 Smoke billows following a reported air strike in the rebel-held parts of the Jobar district, on the eastern outskirts of the Syrian capital Damascus, on March 19, 2017. Heavy clashes rocked eastern districts of Damscus as rebels and jihadists tried to fight their way into the city centre in a surprise assault on government forces. AFP

BEIRUT, Lebanon — Heavy clashes rocked eastern districts of the Syrian capital on Sunday as rebels and jihadists tried to fight their way into the city center in a surprise assault on government forces.

The attack comes just days before a fresh round of UN-brokered peace talks in Geneva aiming at ending Syria’s six-year war.

Rebels and government forces agreed to a nationwide cessation of hostilities in December, but fighting has continued across much of the country, including in the capital.

Rebels seized several buildings in Jobar and advanced into the nearby Abbasid Square area, seizing part of a bus station before being pushed back, he said.

“After a major advance by opposition fighters, the regime got over its shock and began a counter-offensive,” he said.

State television, quoting a military source, said the army “tightened the noose around terrorist groups besieged in the industrial zone on the northern edges of Jobar”.

“Rebels want to link their territory in Jobar with Qabun to break the government siege there,” Abdel Rahman added.

An AFP correspondent said civilians in government-held parts of northeast Damascus remained indoors, even as the intensity of the clashes subsided later and the fighting moved further away.

State media said the army successfully “blocked an attack by terrorists on military points and residential buildings in Jobar”, an area close to the city centre.

State television aired footage from Abbasid Square, typically buzzing with activity but now empty because the army had ordered residents to stay indoors.

AFP correspondents said soldiers had sealed off routes into the square.

Several schools said they would stay closed on Monday.

Control of Jobar — which has been a battleground for more than two years — is divided between rebels and allied jihadists and government forces.

The Islamist Faylaq al-Rahman rebel group and the Fateh al-Sham Front have a presence in the area, the Observatory said.

With Sunday’s attack the “rebels have shifted from a defensive position in Jobar into an offensive one,” said Abel Rahman.

“These are not intermittent clashes — these are ongoing attempts to advance,” he said.

The incursion into Abbasid Square, though brief, was the first time in approximately two years that rebels had got that close to the heart of Damascus.

In recent months, the regime has sought to secure territory around the capital with renewed offensives on besieged rebel towns along with local “reconciliation” deals.

Under such agreements, the government agrees to end bombardments and stop besieging towns in exchange for a rebel withdrawal.

On Sunday, dozens of rebels and civilians who had been bused out of the last opposition-held district of Homs city reached northern Aleppo province.

An AFP photographer saw men, women and toddlers peeking out from behind curtains as the buses headed to Jarabulus, a town on the Syrian-Turkish border.

More than 320,000 people have been killed and millions displaced since Syria’s conflict erupted six years ago with protests against Assad’s rule.

After a crackdown, the uprising became an all-out war that has drawn in world powers on nearly all sides.

Syria’s military said it shot down an Israeli jet on Friday and hit another as they carried out early morning strikes near the famed desert city of Palmyra.

Israel denied any of its aircraft were hit and said it had been targeting weapons bound for Lebanon’s Hezbollah movement, which backs Assad in Syria.

The United Nations has sponsored peace talks to end the conflict since 2012, but to no avail.

Government representatives and opposition figures are set to meet for a fourth round of negotiations on March 23 in Switzerland. CBB