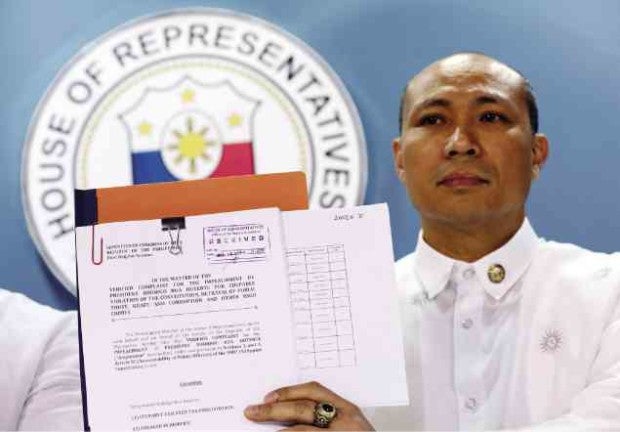 He’s been described as a serial filer of impeachment complaints against sitting Presidents, but this time around, a congressman beat lawyer Oliver Lozano to the draw.

In a two-page complaint filed with the Office of the Ombudsman, the former lawyer of the late strongman President Ferdinand Marcos, questioned the motives of the Magdalo lawmaker in trying to impeach Mr. Duterte over his alleged role in the extrajudicial killings of 8,000 drug suspects and for amassing P2.2 billion in unexplained wealth, among other crimes.

Lozano’s complaint, which referred to President Duterte as Du30, said Alejano did not have personal knowledge of the allegations laid out in his impeachment complaint.

Part of a conspiracy

The former Marcos lawyer claimed that the move to impeach the President was part of a conspiracy backed by the US Central Intelligence Agency and the European Union, as well as Amnesty International and Human Rights Watch, two international human rights organizations critical of the extrajudicial killings linked to Mr. Duterte’s bloody war against illegal drugs.

Lozano also accused the “Yellow Gang” of being behind a plot in hopes of elevating Vice President Leni Robredo to the presidency. 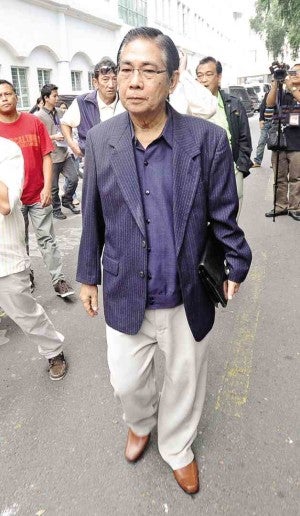 “Therefore, I believe that the complaint for impeachment is part of sustained propaganda to eliminate DU30 and elevate Leni in order to usher the return of the yellow gand [sic]: plunderers, druglords [sic], gambling lords, smugglers, oligarchs, landgrabbers [sic], the vindictive, corrupt and incompetent [sic],” the complaint read.

In his complaint, Lozano warned of a “violent confrontation and bloody revolutionary situation” arising as a result of the political crisis.

Lozano added: “Premises considered, the incendiary plot to impeach the President should be nipped in the bid [sic] in the interest of public welfare by the representatives of the people with overwhelming support of the enlightened citizenry.”

Known for his repeated and unsuccessful attempts to impeach former Presidents Arroyo and Aquino III, Lozano  filed an impeachment complaint against President Arroyo in 2000, for openly calling for the resignation of then President and now Manila Mayor Joseph Estrada, and again in 2005, for her alleged wiretapped conversations with former Election Commissioner Virgilio Garcillano in 2004.

His complaint was, however, dismissed after the minority bloc failed to get the required number of votes to impeach Arroyo and transmit the case to the Senate for trial.

The opposition at that time alleged that Lozano was a “Malacañang dog” turned loose to file an “insufficient” impeachment complaint that would preempt a similar complaint that members of the minority bloc at the House of Representatives were then planning to file.

Though the Constitution does not bar the filing of several  impeachment complaints against an official, it restricts impeachment proceedings against the same official to only once a year.

Lozano filed more impeachment complaints against Arroyo in January and June 2006 and in 2008, all of which were dismissed.

During Mr. Aquino’s term, Lozano first filed an impeachment complaint in 2011 for the latter’s refusal to allow a burial with military honors for Marcos, whose remains were stealthily buried by his family at Libingan ng mga Bayani in November last year.

In 2014, Lozano  again filed a complaint against President Aquino in connection with what the Supreme Court had described as unconstitutional practices in the government’s Disbursement Acceleration Program.  Representatives of the House threw out his complaint, which they  said was weak and lacked substance.

The one time Lozano filed a successful impeachment bid was when he became one of the individual petitioners in the impeachment proceedings against then Supreme Court Chief Justice Renato Corona in 2012.  —With a report by Marielle Median/Inquirer Research