FEU exhibit warns against being ‘desensitized’ by narco killings 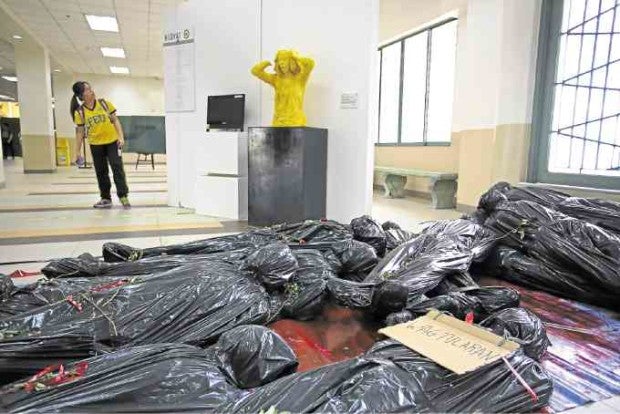 The “Hudyat” exhibit features a pile of “corpses” in trash bags—put together by artist Antipas Delotavo—depicting the spate of extrajudicial killings targeting small-time drug suspects.—photos by KIMBERLY DELA CRUZ

Up ahead: A pile of 14 nameless “corpses” wrapped in black trash bags, dumped on a Manila campus.

If the sight doesn’t give you pause, then the artist and his peers behind an ongoing exhibit at Far Eastern University (FEU) indeed face a tough challenge.

The collective effort dubbed “Hudyat: Filipino Artists for Human Dignity” adds to the wave of protests against the spate of killings linked to the Duterte administration’s controversial war on drugs.

Running until March 25, the exhibit is decidedly dark, conveying images of death and violence, as it hopes to provoke indignation among viewers at a time when the killings, mostly targeting the poor, have become a daily, numbing reality in the streets.

“Hudyat (Warning)” was mounted by 32 artists and photographers alarmed by the drug war’s rising death toll, which now stands at around 8,000.

Among the featured works are those of National Artist Ben Cabrera, Julie Lluch and Toym Imao, and Inquirer photojournalist Raffy Lerma.

Edna Aquino, one of the organizers, said the project seeks to warn the public against being “desensitized” by the killings and accepting brutality—either at the hands of the police or so-called vigilantes—as the only effective solution to the drug menace.

Until the government addresses poverty and joblessness as the root cause of the problem, the war being waged mainly against small-time drug users or pushers would be all for naught, she said.

“[The poor] are lured into the drug trade because they have no jobs and have nothing to eat. It’s a question of survival,” Aquino told the Inquirer in an interview. 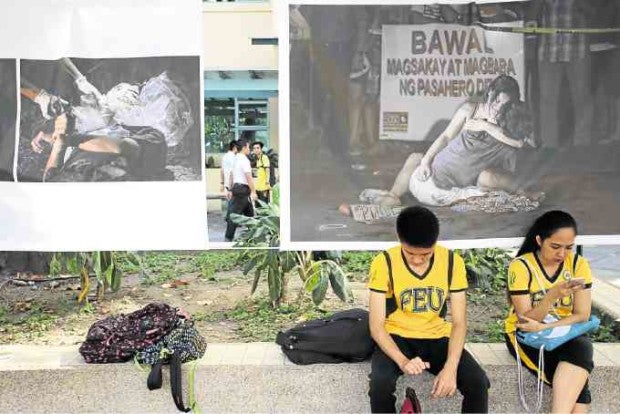 The killings had actually made her feel less safe when going outdoors since she or members of her family could one day end up among the innocent victims, Sabado said.

Aquino said the regularity of the vigilante-style killings only showed the government may even be “acquiescent” to extrajudicial killings and human rights abuses.

With a week more to go for the exhibit, Aquino hopes that viewers who have seen the displays will also find their own voices and support similar efforts that uphold human dignity which, as depicted by the Hudyat artists and photographers, has become the drug war’s ultimate casualty.