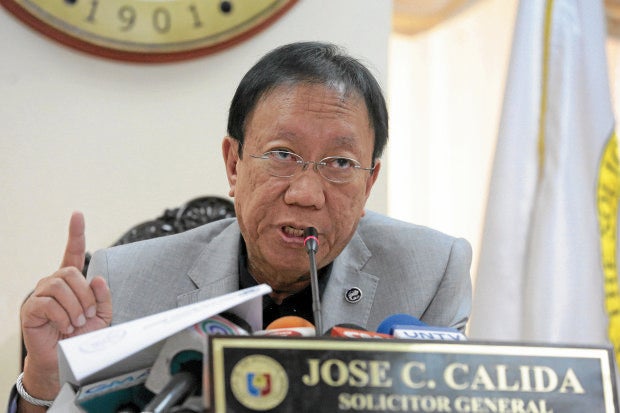 Solicitor General Jose Calida said on Saturday that Vice President Leni Robredo should be impeached for “betraying the trust of the people.”

That was the same thing that House Speaker Pantaleon Alvarez said on Thursday, after Magdalo Rep. Gary Alejano filed an impeachment complaint against President Rodrigo Duterte.

“I fully understand and support the sentiment of Speaker Bebot Alvarez that VP Robredo should be rightfully condemned for slandering and selling out our country and its leaders before the UN Commission on Narcotics Drugs,” Calida said in a statement.

“VP Robredo debased her office and herself by betraying the trust of our people,” he added. “Worse, she shamelessly pandered to the desperate desire of Yellow Cult to depose President Duterte which if successful, will immensely benefit her.”

In an interview with CNN Philippines, Alvarez said Robredo could be impeached for betrayal of public trust for sending a video message to the United Nations criticizing the Duterte administration’s war on drugs.

Alvarez said Robredo painted the country in a bad light before the international community, which could have serious economic consequences.

He said that Robredo had joined the “ranks of the destabilizers,” but she will “reap the the people’s wrath and contempt for her treasonous act.”

Calida added he would “gladly” offer his legal services if Alvarez would initiate the impeachment of Robredo.

Robredo on Wednesday exposed the alleged “palit ulo” scheme under which poor families are rounded up by the police who will then demand that relatives be taken in exchange for accused drug personalities who cannot be found.