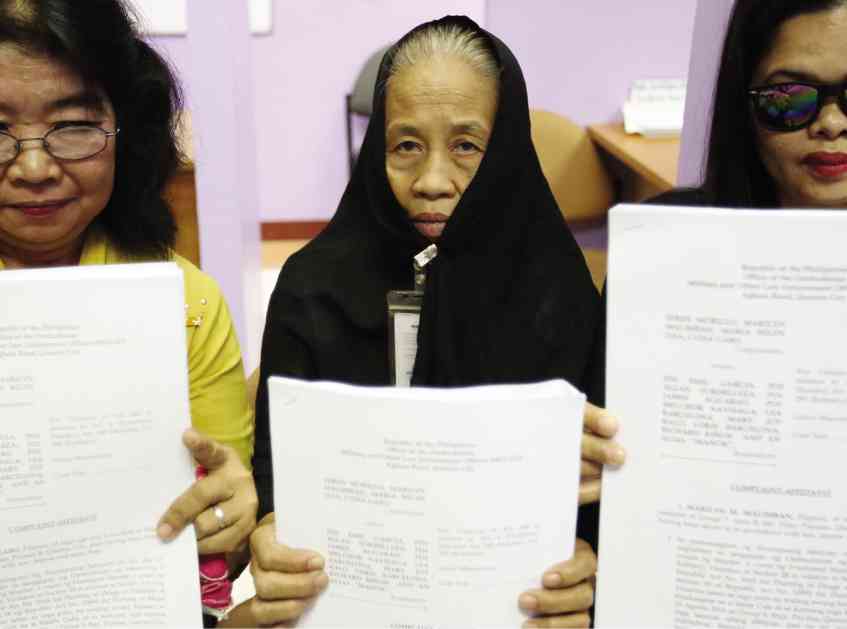 After securing a protection order from the court, three women who lost loved ones in President Duterte’s bloody campaign against illegal drugs pressed on with their legal battle against the Quezon City policemen involved in a raid that ended in the “execution” of four garbage collectors last year.

The women appeared at the Office of the Ombudsman to file murder complaints on Thursday despite the “continuing intimidation” and “veiled threats” that they experience in their neighborhood, according to their lawyer.

The three men, along with the fourth target Anthony Comendo, were allegedly shot at close range just outside Marcelo Daa’s house. Morillo managed to crawl away and hide despite being shot in the chest.

The complainants’ lawyer, Romel Bagares, executive director of the Center for International Law, said Comendo’s family opted not to press charges “out of fear.”

In a move unprecedented in President Duterte’s war on drugs, Murillo and the families of his slain friends petitioned for a writ of amparo, which the Supreme Court granted on Jan. 31. The Court of Appeals later issued a permanent protection order on Feb. 10.
2 bodies dumped

Bagares, however, said “we think that there’s still intimidation going on.”

His fellow counsels, he said, reported that “just the other day, two dead bodies were disposed of” near Daa’s house, which Bagares interpreted as “a veiled threat against our clients.”

Also sued were their purported informants identified as Lea Barcelona, Mary Joy Ralo, Lorie Barcelona, Richard Riñon, and a man known only by the moniker “Manok.”

According to the complainants, they learned from neighbors that the killings took place at Daa’s house around 3:30 p.m. of Aug. 21. While Morillo and the others were playing pool, the policemen arrived, placed them under arrest, and forced them to admit that they were keeping a plastic sachet containing a white substance—which the officers themselves produced.

They cited autopsy reports indicating that four drug suspects were shot pointblank while kneeling or lying down, contrary to the QCPD’s official account that they were killed in a shootout.

They particularly tagged Formilleza as the officer who shot Morillo while the latter was seated, and pointed to Manok as the one who took pieces of jewelry and other valuables from Daa’s house.
Tokhang guidelines

The women also maintained that the QCPD team violated the operational guidelines set by the Philippine National Police for its antidrug campaign known as Oplan Tokhang.

For one, they did not show proof that they were designated by the Station 6 Anti-Illegal Drug Special Operation Task Group to carry out the operation, the complainants said.

“They did not go to the house of Marcelo Daa Jr. to merely ‘knock and plead’ (which) is the supposed purpose of Oplan Tokhang,” their affidavit said. “In the interviews, as well as in the police reports, they claim that the deceased have already been labeled as drug suspects even before the operations.”

“They have not given any proof to support their allegations that the victims are drug suspects, and they had not shown any proof that there was preoperation clearance for the said operation.”