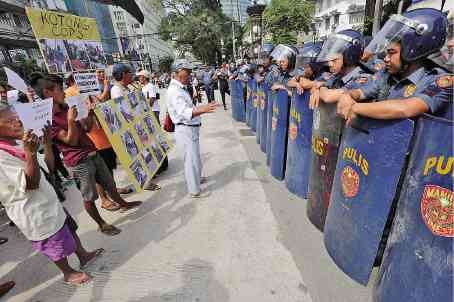 A group of vendors formally filed complaints on Thursday against seven Manila policemen who allegedly forced them to cough up P100 to P200 every day.

The respondents are all assigned to the MPD’s Ermita station.

The vendors—members of the urban poor group Kadamay Manila and United Vendors Alliance—said that the policemen had been demanding P100 to P200 daily from them as protection money.

Should they refuse to pay up, the lawmen threatened to drive them away from TM Kalaw Street where they hawk their wares, they added.

The vendors also alleged that the Ermita policemen were just one of several groups of lawmen extorting money from them.

MPD director Chief Supt. Joel Coronel, meanwhile, described the allegations as “serious” as he ordered the policemen to submit an explanation.

The vendors filed the complaints a day after holding a rally that displayed photos of the respondent officers in front of the MPD headquarters on UN Avenue on Wednesday.