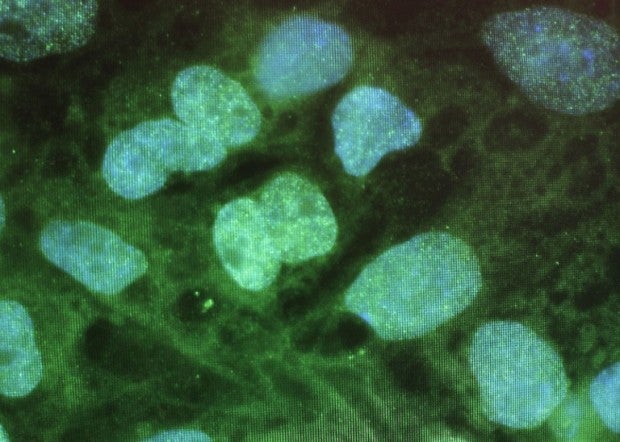 Stem cells are viewed on a computer screen at the University of Connecticut`s (UConn) Stem Cell Institute at the UConn Health Center on August 27, 2010, in Farmington, Connecticut. An unproven stem cell therapy that involves extracting a patient’s fat tissue and injecting it into the eyes has caused three US women to go blind, a report said on March 15, 2017. AFP

MIAMI, United States — An unproven stem cell therapy that involves extracting a patient’s fat tissue and injecting it into the eyes has caused three US women to go blind,  a report said Wednesday.

The women, aged between 72 and 88, were treated in Florida in 2015 for a progressive eye disease called macular degeneration, said the report in the New England Journal of Medicine.

They thought they were enrolling in a legitimate clinical trial, having found it under the title: “Study to assess the safety and effects of cells injected intravitreal in dry macular degeneration” on ClinicalTrials.gov, the US government website for such research.

However, they immediately suffered complications, including retinal detachment and hemorrhage, which caused total loss of eyesight.

The clinic and patients involved were not named in the study, which was co-authored by Thomas Albini, associate professor of clinical ophthalmology at the University of Miami.

Two of the patients sought treatment at the university’s hospital for the complications they suffered.

“There’s a lot of hope for stem cells, and these types of clinics appeal to patients desperate for care who hope that stem cells are going to be the answer,” said Albini.

“But in this case these women participated in a clinical enterprise that was off-the-charts dangerous.”

The procedure claimed to use adipose-derived stem cells to restore vision.

Patients had fat cells removed from their abdomens. This fat tissue was processed with enzymes in order to get stem cells, which would be mixed with platelet-dense plasma and injected into their eyes.

Albini said the complications could have been caused by contamination during the mixing process, or the stem cells, once injected into the eye, could have changed into a type of cell that led to scarring.

Whatever happened, experts said there was no evidence to suggest the procedure would have helped restore vision, since so little study has been done on whether adipose-derived stem cells can mature into the kinds of retinal cells that are involved in macular degeneration.

“Reading this article gives me chills down my spine,” said Nazanin Barzideh, chief of vitreoretinal surgery at Winthrop University Hospital in Mineola, New York, who was not involved in the study.

“There were so many red flags,” she told AFP.

Among them, the patients received injections in both eyes at the same time, when more responsible physicians would have tried one first to see how the patient reacted to the procedure before doing the other eye.

“You do not do a bilateral injection in the same setting,” she said.

Also, the patients were asked to pay $5,000 each for the procedure, which is a signal of fraud since clinical trials do not charge patients to participate.

“There is also no basic evidence for this trial,” she said, urging patients to always seek a second opinion from a medical professional before agreeing to any therapy.

Another outside expert, Sung Chul Park, director of the Glaucoma Clinic at Manhattan Eye, Ear and Throat Hospital, agreed.

“These cases emphasize the importance of evidence-based medicine in patient care,” he said.

Co-author Jeffrey Goldberg, professor and chair of ophthalmology at the Stanford University School of Medicine, described the report as a “call to awareness for patients, physicians and regulatory agencies of the risks of this kind of minimally regulated, patient-funded research.”

The US Food and Drug Administration has since released more specific guidelines requiring regulatory oversight and approval for these types of procedures.

Clinical trials can be confusing, so Goldberg recommended patients search online for “A Closer Look at Stem Cells,” by the International Society for Stem Cell Research, for more information.

“Although numerous stem cell therapies for medical disorders are being investigated at research institutions with appropriate regulatory oversight, many stem cell clinics are treating patients with little oversight and with no proof of efficacy,” said the study. CBB