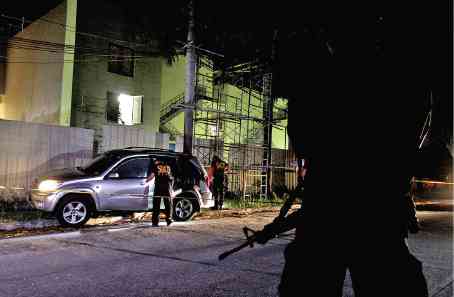 A Chinese man was shot and killed by unidentified gunmen who chased and sideswiped his sport utility vehicle in Parañaque City on Tuesday night.

Investigators said they were determining if the shooting stemmed from a road rage incident or if the victim was killed over drugs since a sachet of suspected “shabu” (crystal meth) was found in his pocket.

Before the 42-year-old Chua was shot, a witness said she saw the victim’s SUV being chased by two vans on the southbound side of Diosdado Macapagal Avenue.

As the vehicles turned right on Pacific Avenue, the vans sideswiped the SUV, leaving long gashes on its left side, she added.

Minutes later, the witness heard gunshots and saw the two vans heading toward Cavite Expressway. She was unable to see their license plates.

According to the report of case investigators SPO2 Israel Perez and SPO1 Walter Dulawan, the shooting happened around 9 p.m. on Tuesday.

Chief Insp. Allan Abaquita, head of the Parañaque police investigation section, said they had started looking into Chua’s background after they found a sachet of suspected shabu in his pocket. The victim also carried an ATM card issued to Marjorie D. Redoble.