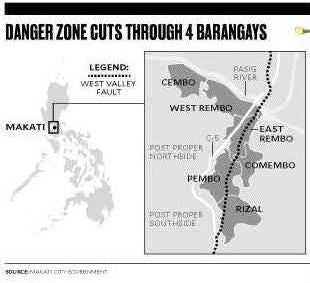 “This is a huge problem,” 65-year-old Nely Gorion said after she found out that a corner of her house in Makati was very close to a fault line  running through the city.

On Wednesday, the Makati City government held an assembly in Barangay Rizal, the second of four dialogues aimed at convincing residents located within the danger zone of the West Valley Fault of the risks they face should they refuse to evacuate.

Structures located on top of or within 5 meters of the fault line are considered to be within the danger zone.

A distressed Gorion said she obtained the necessary permits for her house in 2011 after the Philippine Institute of Volcanology and Seismology (Phivolcs) certified that the lot was 10 meters away from the fault line.

From being three houses away from theirs, the fault line is now next to their own home, she said. The Gorion family’s lot is among 99 pieces of property in Barangay Rizal located within the danger zone.

Jeffrey Perez, Phivolcs supervising science research specialist, explained that a remapping was conducted from 2011 to 2012 to fill the gaps in the fault trace.

The remapping was based on aerial photos taken in 1940s when the area was still a rice field. Phivolcs also conducted Walk-the-Fault activities to mark the fault line.

Perez said the latest Valley Fault Atlas was more accurate than the previous map that relied on aerial photos circa 1970s when the topography had been obscured by subdivisions.

Ordinance to be modified

Mayor Abby Binay said the zoning ordinance would be modified so that owners could keep the portion of their lot outside the danger zone like in Gorion’s case. The area within the danger zone would be converted into linear parks.

Gorion was distraught while thinking about how to tear down a portion of their house after spending a lot of money to follow the engineering requirements.

Binay, however, told the residents that their lives were more important than material possessions.

She reiterated that the city government would give financial assistance to affected families who were given until March next year to relocate. And should they opt to stay, they would need to sign a waiver to indicate that they were aware of the risks.

Based on the 2014 survey of the city government, about 405 households in four barangays   (Comembo, Rizal, Pembo and East Rembo) were within the danger zone. The portion of the West Valley Fault that runs through Makati is 3 kilometers long./rga