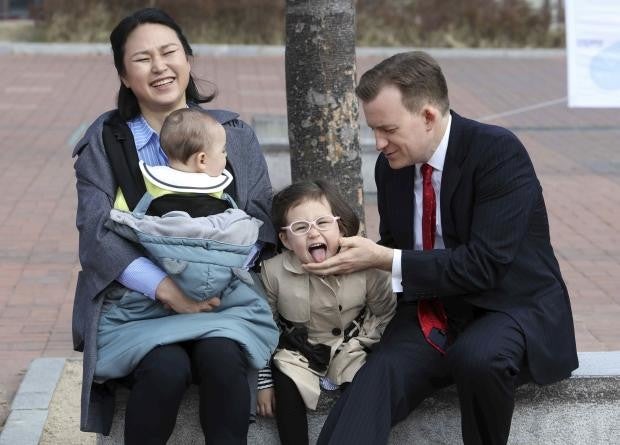 Robert Kelly (right), a political science professor at Pusan National University, waits for a news conference to start with his wife Jung-a Kim (left) and children James and Marion, at the university in Busan, South Korea, Wednesday, March 15, 2017. As Kelly speaks from his home office via Skype with BBC about the just-ousted South Korean president, his eyes dart left as he watches on his computer screen as his young daughter parades into the room behind him. Her jaunty entrance resembles the exuberant march of the Munchkins celebrating the Wicked Witch’s death in the “The Wizard of Oz.” (Photo by HA KYUNG-MIN/Newsis via AP)

As Kelly speaks from his home office via Skype with BBC about the just-ousted South Korean president, his eyes dart left as he watches on his computer screen as his young daughter parades into the room behind him. Her jaunty entrance resembles the exuberant march of the Munchkins celebrating the Wicked Witch’s death in the “The Wizard of Oz.”

And that was just the opening act in a series of mounting mini-calamities – the BBC presenter later called it “a perfect piece of physical comedy” — that has made the Friday interview a viral hit: The BBC estimates 100 million views. Kelly on Wednesday called the interview “a very public family blooper, nothing more,” but it has created a new, bewildering level of celebrity for the well-known though low-key analyst and frequent commentator on the Koreas for foreign media.

The following is a post-mortem of a live interview disaster or, depending on your point of view, a nugget of internet comedy gold:

Just as Kelly, a political science professor at Pusan National University in the port city of Busan, says “… the question is, How do democracies respond to those scandals,” the unlocked door to his home office pops open and in prances Marion, 4, wearing a yellow sweater and glasses, her hair in pigtails.

Her walk – elbows raised like chicken wings, head thrown back and rocking side to side, knees high – suggests a drum major leading a marching band down Main Street.

Clearly, all is right with her world.

Kelly keeps facing forward, but his eyes shift to the left at Skype’s picture-within-picture on his computer screen. The BBC presenter, James Menendez, points out the obvious: “I think one of your children has just walked in.”

When she arrives at his elbow, Kelly continues to face the camera but attempts to use his left arm to push her, gently but firmly, back.

Just as Menendez attempts to ask whether the removal from office of President Park Geun-hye will influence relations between the rival Koreas more trouble looms in the doorway.

James, 9-months-old, at the helm of a rolling walker, stops briefly and surveys the scene.

A decision quickly settled in favor of forward motion, James propels his walker into the room, legs churning, arms lifted high, like one of those “dancing” air-balloons that shimmy in front of used car shops.

Sister, rejected by dad, leans back onto a bed with books piled on it. Some of the books tumble to the floor.

Kelly attempts to soldier on with the interview. “I would be surprised if they do,” he says to anyone still focused on his analysis of whether inter-Korean relations will change.

James coos and gurgles as he nears pops and sis.

In a flash, the next entrant to a scene the Marx Brothers would have appreciated slides sideways into the room on her socks, banging the door into a bookcase.

Kelly’s wife, Jung-a Kim, momentarily fixes her eyes on the computer screen before shifting with laser-like focus on the escaped children.

She turns on a dime and drops down. As her knees bang on the floor, Kelly closes his eyes for much longer than a typical blink. “Pardon me,” he says.

Kim gets her right hand on the baby’s walker, her left hand on her daughter and, with a double-yanking motion, begins to back out of the room, still crouched down. More books bang onto the floor.

“My apologies,” Kelly says, bowing his head and laughing nervously.

The presenter attempts another question – “What does this mean for the region?” – just as mom lets go of the baby walker, keeping the squirming daughter still in her grip, opens the door and backs out, dragging both kids with her.

Kelly again closes his eyes for a long beat. Another “My apologies.” Some voices of childlike complaint from the hallway. “Sorry,” Kelly murmurs.

Mom then appears again, on her knees. She stretches out and pulls the door closed, causing a map on the wall to billow slightly. As one of the children lets loose a cry of anger and frustration from the other room, Kelly attempts to continue his answer: “South Korea’s policy toward North Korea …”

Menendez said in a follow-up interview that the moment made the Kellys “the most famous family in the world,” but the professor says it’s been a bit overwhelming. He turned off his phone for a while and stopped posting on social media.

“We understand why people find it enjoyable,” Kelly told Menendez, Kim and their children by his side in the same room as the first video. “It’s sort of catching a regular family off guard.”

Kim said it has been “a little bit stressful.”

Kelly said the family was “pretty uncomfortable” with online comments that assumed Kim was the nanny.

He also addressed another online theory – that the reason he didn’t help corral the kids himself was because he wasn’t wearing any pants or was in his pajama bottoms.

“Yes,” he said, laughing, “I was wearing pants.” –Foster Klug