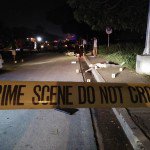 DAGUPAN CITY — A suspected drug dealer was shot dead on Monday night (March 13) after he fired at policemen in San Fabian town in Pangasinan province, making him the province’s first fatality in the re-launching of the Philippine National Police’s anti-drug campaign, Oplan Double Barrel.

Ernesto Velasco was listed in neighboring San Jacinto town’s drug watchlist and was about to be arrested in a buy-bust operation in Barangay Binday in San Fabian at about 10:20 p.m.

Velasco fled on a motorcycle but he crashed after a brief chase along the village road, said Chief Insp. Arvin Jacob, San Fabian police chief.

As policemen approached to help him up, Velasco pulled out a gun and shot at them, prompting the policemen to fire back and kill him.

The Oplan Double Barrel was relaunched by the Pangasinan provincial police on March 8.  SFM/rga