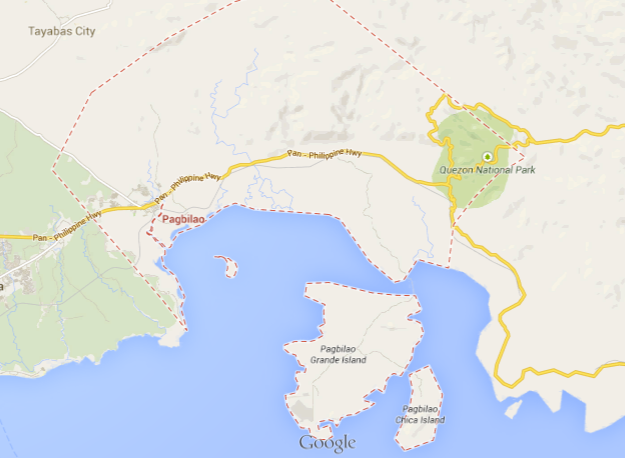 Reports said a Toyota Hilux police patrol vehicle being driven by Police Officer 2 Khemar Barquiles was traveling along the Maharlika Highway in Barangay (village) Binahaan around 2 p.m. when civilian passenger Jose Yuson allegedly grabbed the steering wheel of the vehicle.

The police vehicle turned wayward and occupied the opposite lane and eventually sideswiped the incoming Toyota Fortuner being driven by Carlos Pastorpide.

Aside from Barquiles and Yuson, the other passengers of the police vehicle – Senior Insp. Reynaldo Dalumpienes, San Andres chief of police; Police Officers 1 Rodel Minchero, Fernando Postelos Jr. and Bien Care; and two civilians Yessa Banquiles and Florida Jumao, residents of Barangay Camflora in San Andres, Quezon — sustained injuries and were rushed at the MMG Hospital in Lucena City.

The police vehicle was headed to San Andres town to bring Yuson home to Barangay Camflora.  Barangay Camflora was where four rebels were  slain on Tuesday in a 30-minute clash between New People’s Army rebels and Army soldiers.

The soldiers arrested a suspected rebel, Christopher Redota after the firefight. The soldiers also found Jennifer Yuson, Jose Yuson’s daughter who sustained a bullet wound in her left arm. Jennifer is confined in a military hospital in Metro Manila while Redota and JoseYuson were brought to the police headquarters in Camp Nakar in Lucena City.

“He (Jose) will serve as a witness against the NPA. But he is afraid. It seems his mind is disturbed,” Armamento said in a phone interview on Saturday.

“He showed signs of trauma from the encounter. I suggested to the barangay officials to seek medical and psychological intervention for him,” Edgar de Luna, Commission on Human Rights-Region IV chief investigator, said.

Jose even attempted to escape from the custody of the Criminal Investigation and Detection Group inside Camp Nakar early evening Friday, De Luna said.

He added Jose was not detained at the CIDG jail and could freely move around. “But he was immediately accosted by the guards at the gate for his suspicious demeanor,” he said.

“He really wants to go home. He was extremely worried about his wounded daughter and his three grandchildren,” he said.

According to the military, Jennifer’s three small children are under the custody of Department of Social Welfare and Development in Quezon province.  SFM/rga