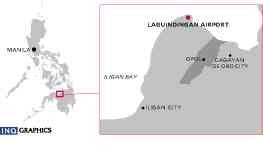 CAGAYAN DE ORO CITY—The collapse of a bridge in Opol town in Misamis Oriental province on Tuesday triggered a massive traffic jam that prolonged travel from this city to the Laguindingan airport to between five and eight hours.

Passengers missed their flights, prompting Philippine Airlines to announce on Wednesday it would allow free rebooking of tickets of those caught in the gridlock.

Travel to Laguindingan airport, which is 35 kilometers from this city, takes only 34 minutes through the highway that passes through Opol, a town some 4 km from the airport.

Project engineers of the Department of Public Works and Highways (DPWH) have blamed the continuous rains in the past few days for the collapse of the bridge, according to Vinah Maghinay, spokesperson of DPWH in Northern Mindanao.

Motorists from Cagayan de Oro who were traveling to Iligan City in Lanao del Norte province that day were also stuck in traffic.

Nelson Constantino, a Cagayan de Oro resident whose mother flew in from Iloilo Cityon Tuesday after undergoing angioplasty, left Laguindingan airport at 3:30 p.m.  but was stuck for hours in Opol town. “The traffic was just too stressful for my mother,” he said.

Fernando Dy Jr., head of the Provincial Disaster Risk Reduction and Management Office of Misamis Oriental, said more than 1,000 vehicles were stuck along the stretch of highway connecting Cagayan de Oro and Laguindingan.