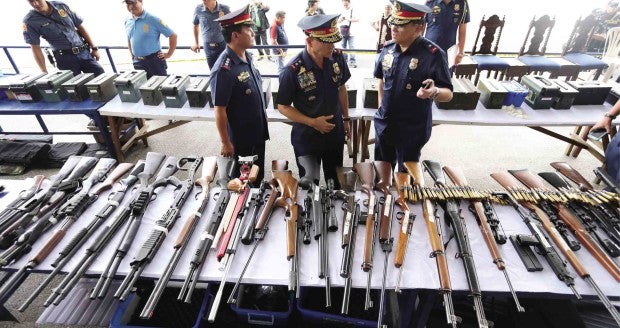 Fifty-six rifles, 18 pistols, 27 hand grenades, 62 rifle grenades and over 17,000 rounds of ammunition were found inside a “secret room” at 36 Tandang Sora Ave., according to police. —EDWIN BACASMAS

That’s how the police described the new cache of weapons they said they found at  36 Tandang Sora Avenue, Barangay New Era, which earlier yielded 5  guns and hundreds of rounds of ammunition when first raided last week.

The QCPD first raided the compound on March 2 after obtaining a search warrant and rounded up 32 occupants, including expelled INC members Angel Manalo and Lottie Manalo-Hemedez, the estranged siblings of Iglesia executive minister Eduardo Manalo.

Members of the QCPD Talipapa station were given permission by the INC leadership to conduct a “clearing operation” on Wednesday afternoon, this time focusing on a building adjacent to the house used by Angel Manalo, the Inquirer learned.

The QCPD said the search was conducted in the presence of INC officials, Barangay New Era officials, and staff members of an INC-owned media company.

The raided building—which was not searched in the March 2 operation—was said to have been previously occupied by Hemedez. Sources said the structure looked abandoned and had no water or power supply when the police entered it, but that the guns found there were in good condition.

The QCPD director, Chief Supt. Guillermo Lorenzo Eleazar, said the newly found weapons were mostly  high-powered and discovered in a “secret room” on the ground floor.

Presenting the guns to the media on Thursday, Director Oscar Albayalde, chief of the National Capital Region Police Office, said such a “sea of firearms” may be considered to be “voluntarily surrendered” by the INC leadership.

The leaders of the politically influential religious group sought the expulsion of the expelled Manalo siblings from the property after an internal dispute went public in July 2015. The siblings refused to move out even after the INC obtained a Manila court order for their eviction in July 2016.

“We cannot blame the INC leadership because they did not have control in the area for a long time. We don’t know where these weapons came from,” Albayalde said. “Even if we say INC owns the property, they are not staying there. How could they amass these firearms?”

“It will depend on who kept these weapons… Liability will fall on the person who maintained (the armory),” the official added.

“If no license (for the guns) are produced, they can be forfeited in favor of the government, given proper disposition,” Eleazar said, adding that that weapons would be turned over to Camp Crame for verification.

In a ruling issued by the city prosecutor’s office on Wednesday, no bail was recommended for Angel Manalo, who faces charges for illegal possession of firearms. Also charged was his nephew, Victor Eraño Manalo-Hemedez, who was allowed bail.