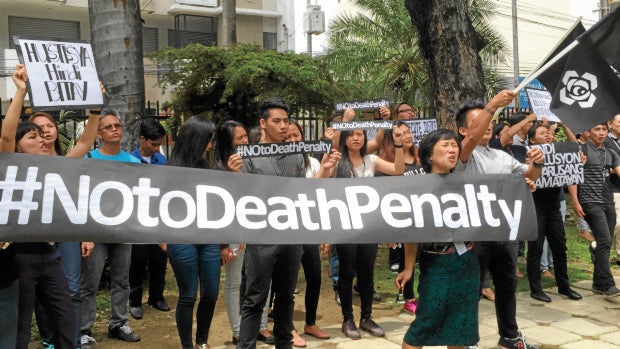 ZAMBOANGA PROTEST Teachers and students of Ateneo de Zamboanga University in Zamboanga City join their
colleagues in Manila in condemning the approval of the death penalty bill on third and final reading by theHouse of
Representatives. —JULIE S. ALIPALA

The death penalty bill is unlikely to pass in the Senate, according to a count by Sen. Panfilo Lacson.

A day after the House of Representatives passed its version of the bill reimposing the death penalty by a vote of 217-54 with one abstention, senators made their fearless forecasts.

“Based on my count, it’s unlikely (to pass) in the Senate,” Lacson told reporters.

“It has not reached 12,” he said, referring to senators favoring the bill, a key element in President Duterte’s war on drugs.

Lacson, an independent, said there was no pressure in the chamber to follow the House lead.

“We will vote on the basis of our beliefs, our convictions and what we think is right in our decision,” he said.

Senate Majority Leader Vicente Sotto III said senators had stated that the bill was not a priority but had promised to act on it.

Sen. Richard Gordon, chair of the justice committee, has indefinitely shelved the bill until the Department of Justice issues an opinion about its impact on the Philippines’ commitments under international conventions banning the death penalty.

Sotto said Gordon had not provided a timeline on when the committee planned to report out the bill for plenary deliberations.

Sotto said he expected a long debate—possibly lasting three to four weeks—beginning in May, when Congress returns from its Holy Week break.

Pacquiao, who filed three separate bills for the revival of the death penalty, exuded confidence.

“Here there is a big possibility that it will go through because drug offenses are our target,” he said.

Pacquiao said “14 or 15” senators were in favor of the measure.

He said he would explain to his colleagues the wisdom of restoring the death penalty.

“We’re not talking about the law of the land, which is the authority. The authority that is established by God, and God giving the authority, the right to use capital punishment. They should understand that,” said the boxing champ, a born-again Christian.

Senate President Aquilino Pimentel III said in a recent interview that the bill could go either way, 10 to 14.

Sen. Franklin Drilon said he expected members and allies in the chamber to adhere to the Liberal Party (LP) position and vote against the bill.

“It’s an uphill battle,” Drilon said. “We have taken an LP stand … We’ll present strong arguments against it.”

Sen. Francis Pangilinan, the LP president, also expected a close vote. “Our argument is that it is antipoor and that this is not a deterrent … There is also the issue that there are chances that [convicts will be put on death row] by mistake. An alleged drug lord may have just been framed,” he said.

“I still believe that, in the final analysis, if there is a speedy trial, if there is speedy punishment, if trials do not take years, if conviction rate is high … it is clear that people will have respect and fear of the law. That’s the solution, not the death penalty,” he said.

Members of the Catholic Bishops’ Conference of the Philippines issued separate statements condemning the House action.

“May God have mercy on us! I appeal to our people to continue to pray that our senators will rise to the occasion,” said Bishop Gerardo Alminaza of San Carlos City in Negros Occidental.

“We hope this will not pass in the Senate,” said Lipa Archbishop Ramon Arguelles. “I am more convinced that we need genuine national transformation. The leaders fail to listen to the sentiments of the great majority and choose to disobey God to keep themselves in power and cater to the ruling elite.”

Balanga Bishop Ruperto Santos said: “With their decision, they have given the death sentence to our imprisoned OFWs (overseas Filipino workers). What is now our moral ascendancy to ask for clemency wherein our government imposes the death penalty?”