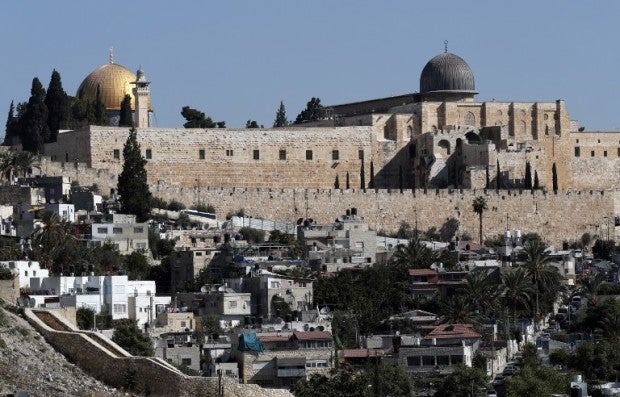 A picture taken on September 19, 2016, shows a part of the Old City of Jerusalem with the rampart, the Dome of the Rock (L) and the dome of the al-Aqsa mosque. AFP

The status of Jerusalem is one of the thorniest issues in the decades-long Israeli-Palestinian conflict.

The League “considers setting up any diplomatic mission in Jerusalem or moving it to the city an explicit attack on the rights of the Palestinian people and all Muslims and Christians”, Tuesday’s resolution read.

The resolution, which did not explicitly mention Trump or the United States which has its Israel embassy in Tel Aviv, was adopted unanimously adopted by the 22-member bloc.

Moving diplomatic missions to Jerusalem would be “a serious violation of international law and the Fourth Geneva Convention, and relevant Security Council resolutions,” it said.

READ: US congressman in Israel to examine embassy move

The Palestinians regard east Jerusalem as the capital of their future state, while Israel proclaims the entire city as its capital.

Departing from Washington’s long-standing position, Trump promised while campaigning to recognize Jerusalem as Israel’s capital and relocate the American mission there, drawing a fierce rebuke from Palestinian officials and concern from the European Union.

Last month Trump said he would “love to see that happen”, and on January 29, Israeli Prime Minister Benjamin Netanyahu urged Trump to keep his promise.

On Sunday, US Congressman Ron DeSantis, chairman of the Subcommittee on National Security, met Israeli leaders to examine the possibility of moving the American embassy to Jerusalem, Israeli officials said.

Israel’s deputy foreign minister Tzipi Hotovely, who met DeSantis, said she was “optimistic” it would happen.

The League resolution asked states and Arab League missions to “monitor and follow up on any move to breach the Security Council resolutions and international law regarding moving diplomatic missions to Jerusalem.”

The foreign ministers also tasked the Arab Group of States in New York “to study effective measures to counter any such move through the United Nations, including the security council”. CBB