US congressman in Israel to examine embassy move 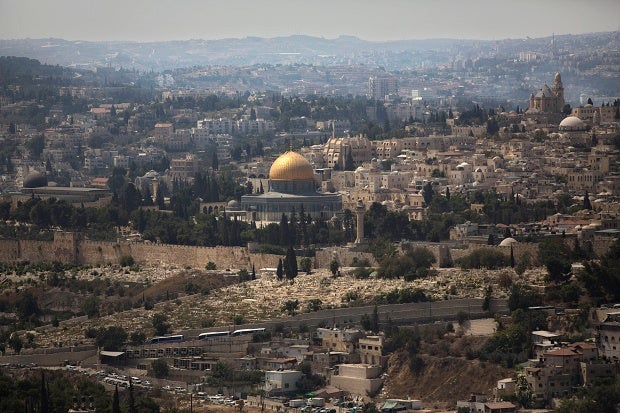 In this Monday, Sept. 9, 2013, file photo, the Dome of the Rock Mosque in the Al-Aqsa Mosque compound is seen in Jerusalem’s Old City. A rectangular hilltop compound in Jerusalem is ground zero of the Israeli-Palestinian conflict. Known to Muslims as the Noble Sanctuary, it is Islam’s third holiest spot and is home to an iconic golden-domed shrine. But to Jews it is the Temple Mount, their holiest place. AP FILE

JERUSALEM — A US member of Congress met top Israeli leaders Sunday to examine the possibility of moving the American embassy from Tel Aviv to Jerusalem, Israeli officials said.

Ron DeSantis, who serves as chair of the Subcommittee on National Security, met Prime Minister Benjamin Netanyahu and they discussed “a number of regional issues including moving the embassy,” an official said on condition of anonymity.

Netanyahu supports the US moving its embassy. “Jerusalem is Israel’s capital and it would be good if the American embassy wasn’t the only one to move here,” he said in January.

Earlier on Sunday, DeSantis met with Yehuda Glick, a lawmaker from Netanyahu’s Likud party, who said the US congressman’s trip was to hold a close examination of the issue of moving the embassy.

Deputy foreign minister Tzipi Hotovely, who met with DeSantis as well, said she was “optimistic” the contested move would take place.

US President Donald Trump had promised during the US presidential campaign to move the embassy to Jerusalem.

Last month he said he would “love to see that happen”.

The city’s status is one of the thorniest issues of the decades-long Israeli-Palestinian conflict.

A US embassy official said on Sunday that “we are at the early stages of the decision-making process on this, and no decision has yet been taken.”

“The president said he is giving serious thought to the matter and is looking at it with great care,” the official said about the possibility of moving the US embassy from Tel Aviv to Jerusalem. CBB