Missile launch was training for strike on US bases — North Korea 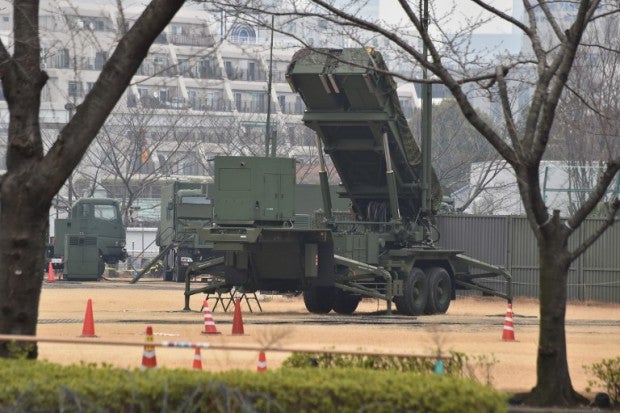 Leader Kim Jong-Un supervised the drill and gave the order for it to start, it said.

“Feasting his eyes on the trails of ballistic rockets”, he praised the Hwasong artillery unit that carried it out, KCNA reported.

“The four ballistic rockets launched simultaneously are so accurate that they look like acrobatic flying corps in formation, he said,” the agency added, referring to Kim.

The military units involved are “tasked to strike the bases of the US imperialist aggressor forces in Japan in contingency”, KCNA said.

Three of the four missiles came down provocatively close to Japan, in waters that are part of its exclusive economic zone.

Washington and Tokyo have sought an emergency meeting of the UN Security Council to discuss the launch, likely to be scheduled for Wednesday.

Under UN resolutions, Pyongyang is barred from any use of ballistic missile technology.

But six sets of UN sanctions since its first nuclear test in 2006 have failed to halt its drive for what it insists are defensive weapons.

The US ambassador to the UN, Nikki Haley, said on Twitter that the world “won’t allow” North Korea to continue on its “destructive path”.

Kim Jong-Un ordered his military “to keep highly alert as required by the grim situation in which an actual war may break out anytime”, KCNA reported, and to be ready to “promptly move, take positions and strike so that it can open fire to annihilate the enemies once the Party Central Committee issues an order”.

READ: US to deploy missiles in S.Korea as North riled

Pyongyang regularly issues threats against its enemies, but Monday’s launches were only the second time its missiles have come down in Japan’s EEZ and represent a challenge for US President Donald Trump, who has described North Korea as a “big, big problem” and vowed to deal with the issue “very strongly”.

The measures include the planned deployment to South Korea of a missile defense system called THAAD, which has infuriated China, the North’s key diplomatic ally and crucial to efforts to persuade it to change its ways.

Under Kim Jong-Un, Pyongyang wants to develop an intercontinental ballistic missile (ICBM) capable of reaching the US mainland — something Trump has vowed would not happen.

South Korea said four missiles were fired from Tongchang County in North Pyongan province into the East Sea — its name for the Sea of Japan.

The missiles travelled about 1,000 kilometers (620 miles) and reached an altitude of 260 kilometres, a spokesman for South Korea’s Joint Chiefs of Staff said. CBB