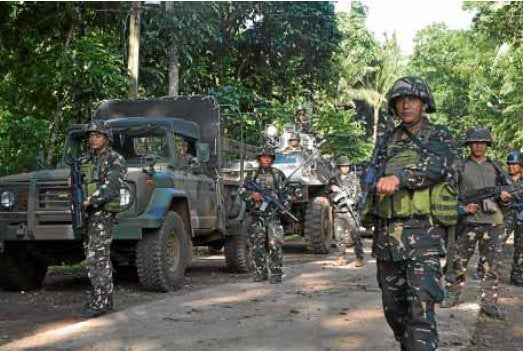 ZAMBOANGA CITY – Nine Abu Sayyaf bandits were killed in a clash with government forces in Maimbung, Sulu, on Sunday.

Sulu-based university professor Octavio Dinampo, a former kidnapping victim who has been monitoring reports of abduction in his province, said the nine bandits slain included Abu Sayyaf sub-leader Aktar Susukan, his wife and the wife of Idang Susukan, another Abu Sayyaf leader who figured in the kidnapping and beheading of Malaysian Bernard Then Ted Fen in November 2015. (Dinampo did not say if and how Aktar Susukan and Idang Susukan were related.)

The nine were killed in Sitio Tundun, Barangay Ipil in Maimbung on Sunday morning, said Dinampo who added he got his information from the Philippine Army.

He said 15 bandits were also wounded but they managed to escape to Barangay Mabahay in Talipao town.

Col. Cirilito Sobejana, commander of Joint Task Force Sulu, said in a separate interview with the INQUIRER.net, that Idang Susukan was wounded and that his brother Jaber, a sub-commander close to Abu Sayyaf top leader Radullan Sahiron, was killed. (Read more: http://newsinfo.inquirer.net/878023/9-abu-sayyaf-bandits-killed since-sunday-clash-with-govt-troops#ixzz4aXisIVSU)