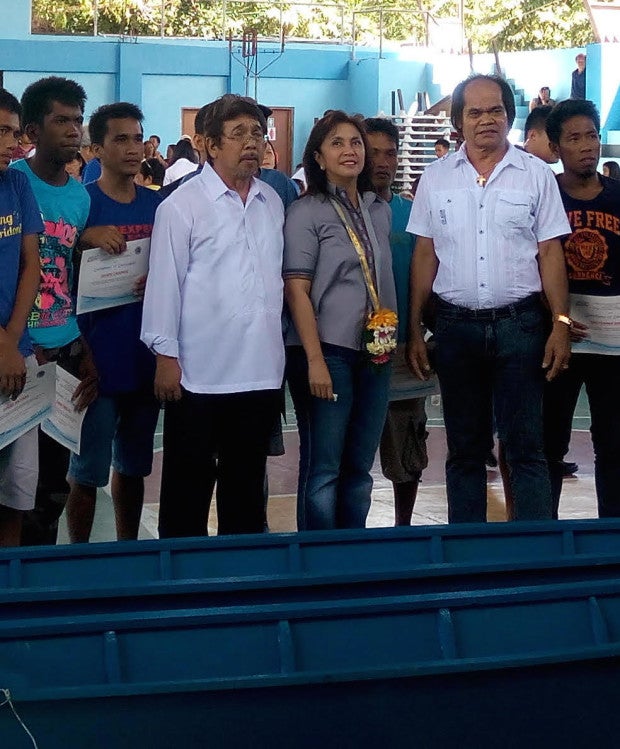 Vice President Leni Robredo leads the distribution of paddle boats to the fishermen of Maribojoc and Panglao in Bohol, on March 2, 2017. On the sidelines of the event, she expressed alarm at the haste by which the House of Representatives passed the restoration of the death penalty for drug trafficking cases. (PHOTO BY LEO UDTOHAN / INQUIRER VISAYAS)

This was how Vice President Leni Robredo felt when she learned that the bill restoring the death penalty on drug cases was approved on second reading at the House of Representatives.

“Medyo nakakabahala. Nakakalungkot. Dahil yung pag-reimpose kasi ng death penalty hindi naman ito basta basta na polisiya ng ating gobiyerno (It is troubling. It is sad because the reimposition of the death penalty is not just an ordinary policy of our government),” said Robredo who was in Bohol on Thursday to lead the distribution of paddle boats to fishermen in the towns of Maribojoc and Panglao.

She pointed out that the restoration of the death penalty would not only change the law but also the country’s belief as a nation.

She insisted that there has been no compelling reason to justify the reimposition of the death penalty.

“Parang masyadong minadali. Marami pang gustong mag interpolate. Hindi lang binigyan ng pagkakataon (It seemed that the passage was done in haste. Several congressmen had wanted to interpolate but they were not
given a chance),” Robredo said.

Robredo also pointed out that no empirical data existed to show that the death penalty reduced crimes.

Instead, she added, statistics had shown that crime incidents had gone up at the time when the capital punishment was in effect.

“So, yung tanong kung hindi siya source sa improvement, bakit pa natin ibabalik (The question is why should we restore the death penalty if it was not a source of any improvement in the crime-fighting situation),” she added.

According to Robredo, killing a person is considered a crime even if it is done through the imposition of the death penalty.

“Yung sa akin yung nakakasala mabibigyan ng pagkataon na pagbayaran yung kanyang pagkasala pero binibigyan siya ng pagkakataon na magbago at maihanda ulit na maibalik sa lipunan. Pero kung pinatay na natin
parang sinabi ating wala na siyang pag-asa (For me, those who committed a crime should pay for their sins but should also be given a chance to change and prepare to be returned to society. If we just kill them, it is just like saying that they have no hope of changing),” said Robredo.  SFM/rga