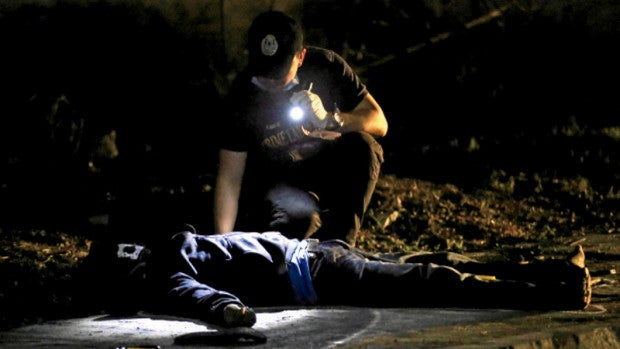 ANOTHER VICTIM Policemen inspect the body of one of two men riding on a motorcycle who were
shot and killed during an encounter with lawmen along C3 Road in Caloocan City on Sunday. Packets of
“shabu” (methamphetamine hydrochloride) were reportedly found on the dead men. RAFFY LERMA/INQUIRER FILE PHOTO

The Philippine National Police (PNP) challenged the Human Rights Watch (HRW) to present solid evidence that could prove that the police were indeed behind  rampant extrajudicial killings in the wake of President Rodrigo Duterte’s brutal war on drugs.

“Provide us affidavits and accounts. We have nothing to hide. Kapag mali, aayusin namin. Kapag may violation of law kakasuhan namin (If there’s an error, we will fix it. If there’s a violation of law, we will file charges),” PNP spokesperson Senior Supt. Dionardo Carlos said in a press briefing at Camp Crame on Thursday.

The international group based in New York released a 124-page report, titled “License to Kill,” that showed details of extrajudicial killings allegedly committed by the police.

But the PNP downplayed the report, which looked into only 24 incidents of summary executions in Metro Manila and nearby provinces. The HRW based their conclusion from accounts of witnesses, family members and analysis of spot and other police reports.

Carlos said the report should not generalize and assume that the 24 cases reflect the entire operations of the PNP against drugs.

“File cases against the (perpetrators behind the) 24 (incidents). We will hold them accountable if they could provide solid evidence, eyewitness accounts pointing to violations of these cops,” he said in Filipino.

“But if they’re going to say that the 24 reflect the entire organization, that’s not right,” Carlos added. IDL/rga