An international human rights group is accusing President Rodrigo Duterte of being criminally liable for the thousands of killings linked to the government’s war on drugs.

The New York-based Human Rights Watch (HRW) on Thursday released a 124-page report, titled “License to Kill,” which gave an overview of Duterte’s war on drugs and detailed specific cases of extrajudicial killings possibly perpetrated by the police.

“[Duterte’s] first six months has been a human rights calamity for the Philippines,” the group said in the report, which also documented Duterte’s statements encouraging the killing of drug suspects.

Since Duterte assumed office in 2016, more than 7,000 people have been killed — some of them killed during police operations and many shot by unidentified gunmen. Almost all of the victims come from poor communities.

Even before being elected, Duterte vowed to clamp down on the illegal drug trade by killing drug pushers and users.

“President Duterte has ordered and instigated and incited these killings,” Peter Bouckaert, the report’s author, told INQUIRER.net. “And he (Duterte) and the people around him are personally, criminally liable for these crimes, which may amount to crimes against humanity.”

Bouckaert, Human Rights Watch’s Emergencies Director, stayed in the Philippines for several weeks in November last year and January this year to get first-hand information on cases of extrajudicial killings.

Through interviews with witnesses and family members and analysis of spot and other police reports, Bouckaert came to the conclusion that the police are involved in the so-called vigilante killings.

“While the Philippine National Police (PNP) have publicly sought to distinguish between suspects killed while resisting police arrest and killings by ‘unknown gunmen’ or ‘vigilantes,’ Human Rights Watch found no such distinction in the cases investigated,” the report said.

However, Bouckaert said, “Our research also shows that the so called unidentified gunmen are involved in these killings were also working in cooperation with the police and are often policemen themselves.”

“It appears the police themselves are carrying out a lot of the killings,” he said, adding that it is slightly different from the extrajudicial killings committed in Davao City when Duterte was still mayor where police reportedly gave orders to a death-squad.

The HRW officer said the police involved in the killings “operate out of uniform” and wear civilian clothes that resemble those of the unidentified gunmen.

“I think we should subject the police to a reality test. It’s virtually impossible for a large group of armed masked gunmen to drive around in these areas that are heavily patrolled by the police and kill individuals day after day after day,” he said, referring to the large group of gunmen often credited for the deaths of suspected drug users.

Bouckaert pointed out that there were cases when people were brought to the police station of to a barangay (village) office “then later killed by so-called unidentified gunmen and classified as found bodies.”

“The chain of custody of the person clearly establishes the police role in these killings,” he said. 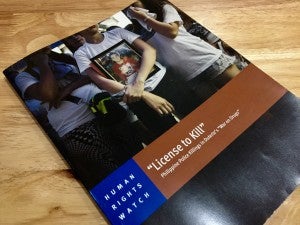 He said their report also details incidents when police shot unarmed suspects “who are already under their control.”

“They will talk about a shootout on the street when somebody was killed inside their home.”

“It’s clear that the police is planting evidence at the scene of these crimes,” he said, narrating a certain case they investigated where witnesses told them that a gun appeared beside the corpse long after the supposed shootout happened.

Bouckaert said the last case he looked into involved an unidentified man who was gunned down in Malate last January 14. A police report says the man was armed and onboard a motorcycle when he engaged the police in a firefight.

However, witnesses said they were able to see the body as the scene was being secured by the police. One witness was able to photograph the body, the image showing that the suspect did not have a gun.

When they returned to the scene later, a gun was already lying beside the corpse. Another witness confirmed that they did not see a gun when they first went to the crime scene.

War against the poor

“Poor neighbordhoods really are terrorized,” he said. “People are sleeping out on the pavement because they are even too afraid to stay in their homes.”

He said “anybody can be targeted, on the slightest suspicion, on the denunciation of the neighbor or on just inaccurate information.”

“And because there is no judiciary is involved, no legal process involved, the police are (both) the judge and the executioner in these cases,” Bouckaert said.

Phelim Kine, HRW Deputy Director for Asia, said all 7,000 people killed should be considered innocent “because they never saw the inside of the courtroom, they never had a lawyer.”

“There was never any type of examination (or) justice. They were just shot down by someone,” he said.

The group claimed that those who have money are left unharmed.

“In many of the cases we investigated, those who were deeply involved in drugs actually were able to bribe their way out of police custody and were unaffected,” Bouckaert said, recalling a story of a victim’s relative.

“We had one case where one young man who was not a drug user (but) was detained together with a drug dealing couple from their house. And they (the couple) bribed their way out of custody” while the young man was killed because his family did not have money to pay for a bribe,” he said.

Bouckaert explained the HRW report is “really for the Filipino people to understand that this is a war on the poor and not a war on drug pushers.”

“And it’s time for the Filipino people, and religious leaders and civil society leaders to clearly stand against the killings of their fellow Filipinos,” he said.

“These Killings have to stop. They are just unacceptable and they have to stop right now,” he said.

Among the recommendations listed in the report is for President Duterte to take steps to end such killings and to stop releasing public statements that “instigate or incite sate security forces and the general public to commit unlawful killings.”

It also called for hearings and investigations on the involvement of the PNP in unlawful killings.

Further, it encouraged foreign donors and partners of the Philippines to suspend financial assistance and other programs “until the Philippine government ends its abusive ‘war on drugs’ and initiates meaningful investigations into alleged unlawful killings.”

The HRW also had specific recommendations for the United States. Among them is a moratorium on weapons sales to the Philippines, the deferment of grants from the Millennium Challenge Corporation, and the reduction of direct assistance and cooperation between the US military and the Armed Forces of the Philippines.”