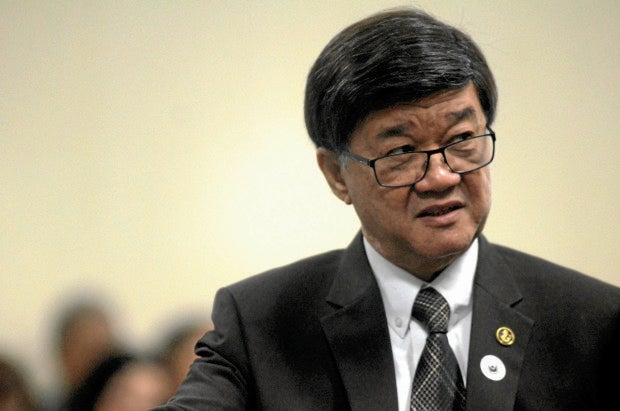 Justice Secretary Vitaliano Aguirre II on Wednesday chided the media for being “illogical” in doubting the claim of a woman that she was “ambushed” after disclosing an alleged P100-million bribe offered to convicts to retract their testimonies against Sen. Leila de Lima.

Aguirre said he had ordered the National Bureau of Investigation to look into the claim of Lalaine Martinez that she had survived an attempt on her life on Feb. 24, an incident which the police had denied.

Martinez is the wife of convicted kidnapper Noel Martinez, one of the high-profile inmates at New Bilibid Prison who had appeared in the House inquiry that had tagged De Lima as behind the narcotics trade in the state penitentiary when she was justice secretary.

“You all saw the vehicle had a bullet hole. She also sustained a gunshot wound. You [concluded] that the ambush was not true because she did not report it to the police. You are illogical,” Aguirre told reporters.

NBI spokesperson Ferdinand Lavin earlier said the bureau could only verify that a bullet had hit Martinez’s vehicle and her arm was “grazed.”

“The NBI has come up with its report. The ambush is real,” he said in Filipino on Wednesday.

The Department of Justice (DOJ) had provided the media photos of a bloodied Martinez alighting from her vehicle and the bullet hole on her car’s windshield.

Lavin said Martinez wasn’t badly hurt, saying the red spots on her arm seen in one DOJ photo were not blood but parts of her red scarf.

Aguirre said Martinez opted not to report the incident to the police as her house was just near the area where the alleged ambush happened in Circuit Makati, the former Santa Ana race track in Makati City.

He said Martinez remained in the area waiting for the police, then “changed her mind” and went home to treat her bullet wound by herself.

According to Aguirre, Martinez said former Sen. Jamby Madrigal and incumbent Biñan City Rep. Marlyn Alonte were behind the alleged bribe offer and that she was Madrigal’s relative.

She, however, said she had recorded evidence of the bribe try, but refused to identify who made the offer. —WITH A REPORT FROM AIE BALAGTAS SEE