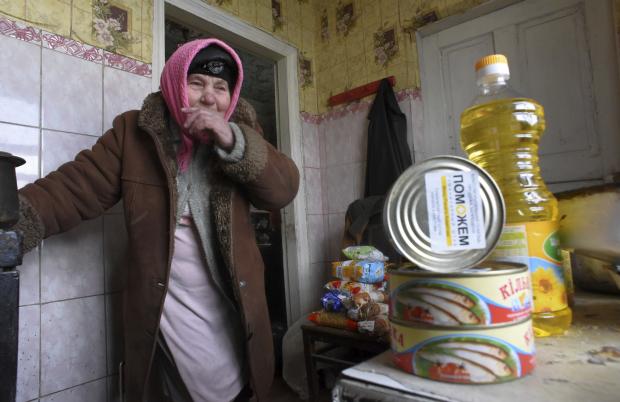 In this photo, taken Jan. 12, 2015, Maria Ivanovna, no family name given, unpacks humanitarian aid she received from the charitable foundation of Ukrainian billionaire Rinat Akhmetov, whose vast wealth is founded on the industrial output of Donetsk coal-rich region, at her house at the outskirts of Donetsk, Eastern Ukraine. The foundation said in a statement on Wednesday, March 1, 2017, that its work in the region has been paralyzed after rebels blocked access to Akhmetov’s Shakhtar FC arena in the rebel capital Donetsk, which hosted the 2012 European football championships and now serves as a warehouse for the relief effort. (Photo by MSTYSLAV CHERNOV/AP)

MOSCOW — Russian-backed rebels are taking over scores of factories and mines in eastern Ukraine, many of them belonging to a tycoon whose foundation has been the largest provider of humanitarian aid to a war-battered population.

The moves announced Wednesday by the rebels came after a weekslong blockade of the east by Ukrainian nationalists and right-wingers. The blockade has seriously disrupted trade on both sides, cutting off much of the coal shipments to government-controlled territory and impeding shipments from the mills and factories that are the east’s economic backbone.

The blockade has raised the already high tensions in Ukraine, where a war between government forces and separatist rebels has killed more than 9,800 people in eastern Ukraine since April 2014.

The Minsk agreement, a 2015 cease-fire pact that has been consistently violated, envisions the rebel-held Donetsk and Luhansk regions remaining in Ukraine, although with expanded local powers. But a recent surge in fighting, the blockade and Russia’s decision last month to recognize passports and other documents issued by the rebels have threatened the goal of reintegrating the regions into Ukraine.

“We are proud that the blockade has hit the pockets of the occupiers. We should call it a war and stop … all trade with the occupied territories,” parliament member Semen Semenchenko, a blockade advocate, told The Associated Press.

Ukrainian President Petro Poroshenko’s government has spoken against the blockade, saying it hurts ordinary Ukrainians in the rest of the country by cutting off coal shipments from separatist regions and creating power shortages. However, it has taken no action to break it, fearing to challenge the nationalist groups.

Poroshenko on Wednesday described the rebel takeover of the industrial assets in the east as a de-facto confiscation and a sign of Russia’s “occupation” of the separatist territories. He called for Western sanctions against those involved in the assets’ seizure.

Donetsk rebel leader Alexander Zakharchenko told local media on Wednesday that in retaliation for Kiev’s blockade, the rebels have taken over the management of 40 factories and coal mines. They include those owned by tycoon Rinat Akhmetov, who is regarded as Ukraine’s richest person.

His Metinvest holding company announced last week that it had stopped operations at a steel mill and a coal mine because of the blockade. Stopping all of the company’s operations could throw 20,000 people out of work, Metinvest said.

There were no immediate reports detailing how management was being taken over by rebels.

Akhmetov’s foundation said in a statement that its work in the region was paralyzed after rebels blocked access to Akhmetov’s Shakhtar FC arena in the rebel capital of Donetsk, which hosted the 2012 European soccer championships and now serves as a warehouse for the relief effort.

Efforts to block the foundation’s access to its facilities in Donetsk “is a threat to the lives of Donbass civilians who have become hostages of the armed conflict and find themselves on the verge of survival in the heart of Europe in the 21st century.”

The foundation says it has given away more than 11 million food packages to local residents. The separatists do not allow Ukrainian aid in, and in recent months have barred virtually all international organizations from operating there.

Russia has been delivering aid to the rebel-controlled east too, but some of the deliveries have ended up in the fighters’ hands. Unlike Akhmetov’s food packages, Russian aid was not distributed directly to the population.

Russian Foreign Minister Sergey Lavrov said, in view of the blockade, the rebel authorities “hardly had any other choice” other than to seize the businesses.

Kremlin spokesman Dmitry Peskov told reporters on Wednesday that Moscow is concerned about a worsening humanitarian situation in the east and pledged that it “will do its best to contribute to a de-escalation” in the area. –Nataliya Vasilyeva

Yuras Karmanau in Minsk, Belarus, and Jim Heintz in Moscow contributed to this story.