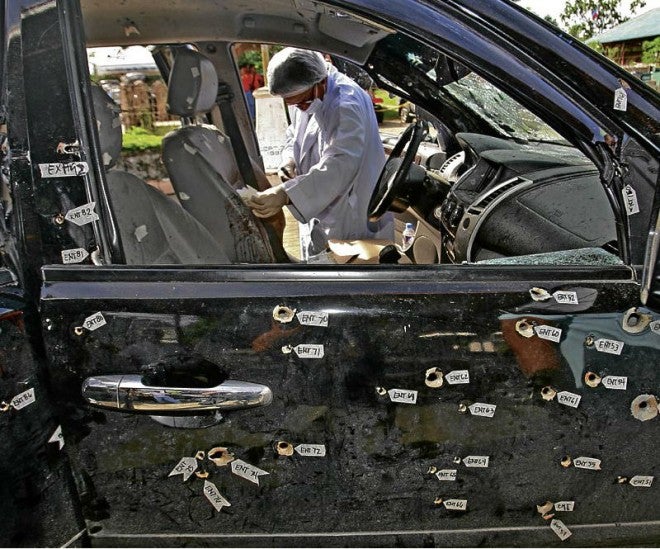 A member of the National Bureau of Investigation forensic team examines marks left by a hail of bullets that hit this SUV and another vehicle, and killed all 13 onboard, including police officers and soldiers in January 2013 in what is now called the Atimonan rubout. (File Photo by RAFFY LERMA/Philippine Daily Inquirer)

The Manila Regional Trial Court Branch 34 has allowed Supt. Hansel Marantan and other accused in the 2013 Atimonan rubout incident to post bail.

Aside from Marantan, allowed to post bail are the following:

“Upon careful and judicious evaluation of the evidence thus far presented, the court finds, and so holds that the prosecution failed to establish that quantum of proof that the guilt of the accused is strong and accused should, therefore be admitted to bail,” the court said in an order dated Feb. 28, 2017.

Thirteen people including suspected gambling lord Vic Siman were killed during the shooting incident in Atimonan Quezon on January 6, 2013.

A case for multiple murder had been filed against all the accused after investigation showed that it was a rubout, not a legitimate police operation.

The Court explained that of the 13 witnesses presented by the prosecution, only two appeared to be present in the area immediately before, during and after the incident—Archie Pelayo and Pfc. Jose Timy Lacar.

Pelayo in his testimony described how the two Montero SUVs where the victims were were flagged down by the authorities, an armed civilian attempted to open the vehicle’s door and shots were fired by the military and armed civilian at the two vehicles.

The Court said defense witness, Capt. Rigo Tagure’s testimony, who was also at the area when the incident happened was more detailed. He said that after Marantan took three to four backward steps from the vehicles came two gunshots from the SUVs followed by the shots fired by the police and military.

“Given such situation, the military and the police personnel have reasonable ground to believe that there was an aggression coming from the Montero vehicles. It was a natural reaction on their part to return fire as to what they perceived to be an unlawful aggression,” the court said.

On the other hand, testimonies of other witnesses presented by the prosecution — such as the ballisticians, forensic chemists, photographers and artist/illustrators — are limited to examinations conducted, photos taken and sketches drafted.

The court added that based on the decision dated March 5, 2014 of the Philippine National Police’s Internal Affairs Services (IAS), the checkpoint in Atimonan was authorized as it was covered by a COPLAN.

“Thus, the presumption of regularity in the performance of official duties arises,” the court said.

It added that except for Marantan, Gollod, Carracedo and Balauag, there was no mention of the actual participation of the other accused other than their presence at the place of the incident.

The court clarified that the grant of bail is without prejudice to the final outcome of the case. Trial of the case will continue. JE

Read Next
Robredo prods Duterte: Focus on ‘war on poverty’
EDITORS' PICK
Pagasa: Warm, sunny Sunday in most parts of PH
vivo’s coming to town to grant wishes with more holiday promos
EDITORIAL: To a bike-friendly future
The Best Tech Gifts For The 2022 Holidays
Is it safe to talk politics again at family gatherings? ‘The Reconciliation Dinner’ shows us what that’s like
House energy committee chair Arroyo bats for cheap electricity
MOST READ
LOOK: Vhong Navarro transferred to BJMP detention facility in Taguig
The Elephant Man in the Senate
Posh village as ‘shabu’ haven
LOOK: Zanjoe Marudo bonds with Ria Atayde, her family
Don't miss out on the latest news and information.