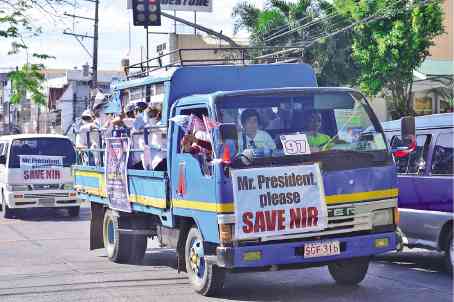 Government officials and workers in the Negros provinces join a caravan to drum up support for the retention of a unified region. —RICHARD MALIHAN/CONTRIBUTOR

Close to two years after the one-Negros region was created, it is facing uncertainty and, possibly, dissolution following a change of national leadership.

Some Cabinet members have announced that President Duterte would be issuing an executive order to scrap the Negros Island Region (NIR) that unites Negros Occidental and Negros Oriental. As of the first week of February, however, the President had not given any order.

The provinces were plucked out from their regional groupings to constitute the NIR, after 20 years of lobbying by Negrense leaders. Then President Benigno Aquino III formalized the NIR’s creation when he signed Executive Order No. 183 on May 29, 2015.

This was the “best thing” that ever happened to Negros Island, according to Edwin Nacionales, 55, an education reform advocate and nongovernment organization worker based in Talisay City in Negros Occidental.

“As a former planning officer, I believe that an island region is essential for Negros Occidental and Negros Oriental to preserve and manage its critical environment,” Nacionales said.

The fate of the NIR lies on the President’s decision on whether he would revoke his predecessor’s executive order. Like what it did last year, the Duterte administration had not allocated any budget to maintain the regional setup for 2017, which Budget Secretary Benjamin Diokno had estimated to cost P19 billion.

Presidential Assistant for the Visayas Michael Diño said the region could be abolished because it would be superseded by a federal form of government, Mr. Duterte’s centerpiece program.

“We are [maintaining a] status quo and we are guided by the executive order creating the NIR,” said Anthony Nuyda, concurrent NIR director of the Department of the Interior and Local Government (DILG).

Regional offices
Marañon and Degamo have been leading officials in the region in waging a strong lobby for the NIR’s retention.

Nuyda, who is also DILG director for Western Visayas, said the regional offices of agencies were operating based on the share of the Negros provinces from the budgets of Central and Western Visayas.

Officials and community leaders have also cited the benefits and advantages of maintaining the NIR.

Regional units have sprouted in the capitals of Bacolod and Dumaguete, employing personnel from provincial offices.

A permanent regional center site is being proposed in Barangay Tagukon in Kabankalan City in Negros Occidental. The area is part of the property of Central Philippines State University, according to Ma. Lina Sanogal, head of Negros Occidental’s Provincial Planning and Development Office and member of the NIR technical working group.

Al Orolfo, regional executive director of the Department of Environment and Natural Resources, said the integration had made possible the cross-boundary protection of forests, watersheds and biodiversity on the island.

“It has become a holistic approach. Negros Island is seen as one ecosystem for [the] protection and marketing [of] its ecotourism loop. (Mt. Kanlaon) no longer divides it,” Orolfo said.

The common management of the seas, forests and wildlife has been boosted, according to environmentalist Gerry Ledesma. He said the establishment of a network around the island was necessary to protect the environment in Negros.

For business leaders and groups, delivery of services has become faster and more effective than ever.

Edward Du, president of the Negros Oriental Chamber of Commerce and Industry, said the biggest gain of the NIR was the establishment of more than 20 regional offices and four regional councils for development, peace and order, disaster risk management, and statistical coordination.

In the absence of any statement from the President, officials of the NIR have also been actively campaigning for the retention of the NIR. Thousands of people have signed a petition of support.

According to Sanogal, Interior Secretary Ismael Sueno is expected to make a presentation this month on the need to retain the NIR before the Cabinet.

It will include accomplishment reports from the NIR regional offices, 2016 operational costs, and a comparative evaluation of service delivery.

Senators Juan Miguel Zubiri and Bam Aquino have filed resolutions for the one-Negros regime. Bills creating the NIR have been filed by Zubiri and Rep. Stephen Paduano of the Abang Lingkod party-list group.

Paduano, who filed House Bill No. 4532 on Nov. 28 last year creating the NIR or Region 18, said the law, if approved, would secure the NIR’s existence and independence from new administrations. The bill is being supported by lawmakers from Negros and other districts in the Visayas.

Another option, according to Negros Occidental Rep. Alfredo Abelardo Benitez, is enacting a law setting up a “federal state of Negros Island” in line with the Duterte administration’s shift to a federal system of government.

The uncertain fate of the NIR has only fueled speculations that politics may be behind this.

Former Interior Secretary Mar Roxas, a close ally of Aquino and one of Mr. Duterte’s rivals in the presidential elections in 2016, was instrumental in pushing the creation of the NIR. Roxas lost in the elections but won by a large margin over Mr. Duterte in Negros Occidental and Negros Oriental.

The “prayers of Negrenses are being answered,” Marañon said, claiming that more Cabinet members were seeing the importance and the need for the NIR.

If the politicians’ exodus to Mr. Duterte’s party can help save the new region, it remains to be seen.