Duterte on rogue cops: Don't be surprised if they're killed one by one | Inquirer News
Close
menu
search

Duterte on rogue cops: Don’t be surprised if they’re killed one by one 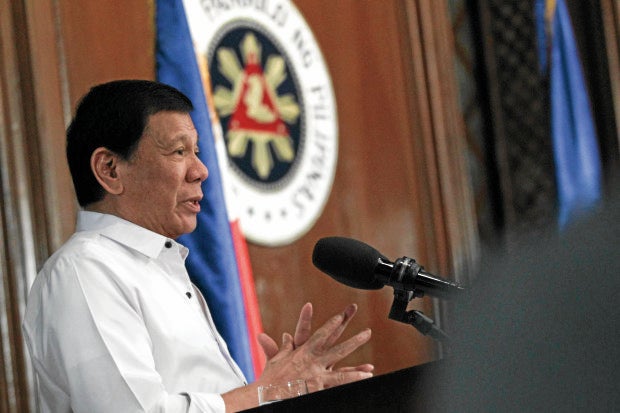 President Rodrigo Duterte on Tuesday threatened errant policemen he earlier ordered deployed to Basilan, saying the public should not be surprised if they will be killed one by one.

“Kung magkamali kayo, mauuna kayong mamamatay (If you commit a wrongdoing, you will die first). I will not spare you,” Duterte said in an interview with reporters in Malacañang.

“I’m warning the public including the media. Don’t be surprised if they are killed one by one,” he said.

Duterte said he instructed the Philippine National Police (PNP) to form a task force that will look after dismissed policemen, including those who refused to follow the Basilan deployment.

READ: Duterte sends off ‘crook cops’ to Basilan with insults

The PNP earlier weeded out supposedly rogue cops in its ranks and temporarily suspended its war on drugs after the controversy surrounding the murder of South Korean businessman Jee Ick-joo inside the police headquarters in Camp Crame.

“I ordered Bato to recruit young men imbued with fervor of patriotism to be member of task forces. ‘Yung piling-pili at walang kaso ng korupsyon (Those who were carefully chosen and have no corruption case). I have to do it because kulang ako ng mga tao (I lack the personnel). I’m fighting NPAs (New People’s Army) and I have this problem in Mindanao and drug,” Duterte said.

“I have to call back the police to do the jobs, most of the time, against drugs pero hindi lahat (but not everything). It will be supervised by the PDEA (Philippine Drug Enforcement Agency) whether conducted by military or police,” he added.

The President said it was up to the PNP whether to reintroduce Oplan Tokhang after it was suspended last month. Citing a supposed return of drug perpetrators in the streets, Dela Rosa on Monday welcomed the possibility of resuming the police’s anti-drug operations.

READ: Bato: PNP ready to go back to drug war

Duterte said even ordinary citizens have the “social duty” to arrest and shoot a criminal in the street.

“An ordinary policeman and military sergeant or citizen of this country can make a valid arrest. Pag namamasyal ako ng gabi at nakakita ako ng (When I go out at night to take a walk and when I see a) transaction and I have the arm, I will place you under arrest. If I think my life is under threat in arresting you, a civilian has this social duty as a citizen to prevent a person who’s about to commit a crime,” he added. RAM/rga