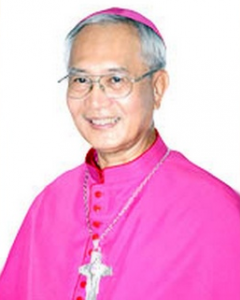 Bishop Joseph Nacua (Photo from the website of the Catholic Bishops Conference of the Philippines at www.cbcpnews.com)

MANILA — Pope Francis has accepted the resignation of the bishop of Ilagan, Isabela, for health reasons.

Ilagan bishop Joseph Nacua, 72, resigned due to the complications of a stroke that he suffered two years ago.

The Pontiff’s acceptance of the prelate’s resignation on February 25 was posted on the news website of the Catholic Bishops Conference of the Philippines.

Fr. Gregorio Uanan, judicial vicar of the Diocese of Ilagan, said Nacua suffered a stroke in 2015 and had to be hospitalized.

Although the prelate has been steadily recovering since then, the stroke has significantly affected his mobility.

“We have a huge diocese and it’s hard for him already so he thought that it would be best for him to just retire,” Uanan said on the CBCP news website.

His resignation at 72 means that he is three years younger than the age at which bishops are required by canon law to submit their resignation to the Pope.

For nine years, he served the Diocese of Ilagan which has more 1.2 million Catholics.

Aside from Ilagan, six other dioceses in the country have no bishops – these are the dioceses of  Daet, Bayombong, Iba, Isabela, Kabankalan, and Mati.  SFM