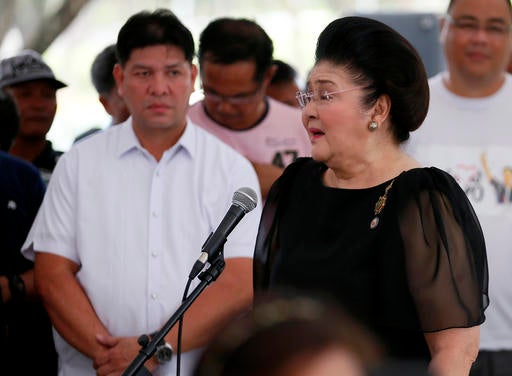 MANILA — The Sandiganbayan has cited the lawyer of former First Lady Imelda Marcos for contempt for his third straight absence from her graft trial.

Upon the motion of Assistant Special Prosecutor Ryan Rey Quilala, the court’s Fifth Division on Tuesday imposed a P2,000 fine on Sison.

Acting chairman Justice Rafael Lagos also said that “we’ll consider the absence of counsel as a waiver of the right to present evidence.”

This meant that the defense team could no longer present Marcos at the witness stand, as well as the stenographers who were supposed to authenticate the court transcripts already presented as defense evidence.

The only evidence presented so far are the 2006 transcripts of stenographic notes by the Manila Regional Trial Court Branch 26, which tackled the government’s failed case against Marcos for “dollar-salting,” or the act of taking money abroad without the central bank’s approval.

One of the transcripts documented Sison’s cross-examination of the late Assistant Solicitor General Cesario del Rosario on Nov. 28, 2006.

In 2006, Del Rosario testified that he briefed Supreme Court Senior Associate Justice Antonio Carpio—who once served as the chief presidential legal counsel of President Fidel  Ramos between 1992 and 1998—on the secret deposits of the Marcoses in Switzerland.

The briefing document apparently mentioned Del Rosario’s “heart-to-heart talk” with Zurich District Attorney Peter Cosandey, in which the Swiss admitted: “I will be very frank with you. It will take you 150 years and still, you have no assurance that your government would get the said assets.” 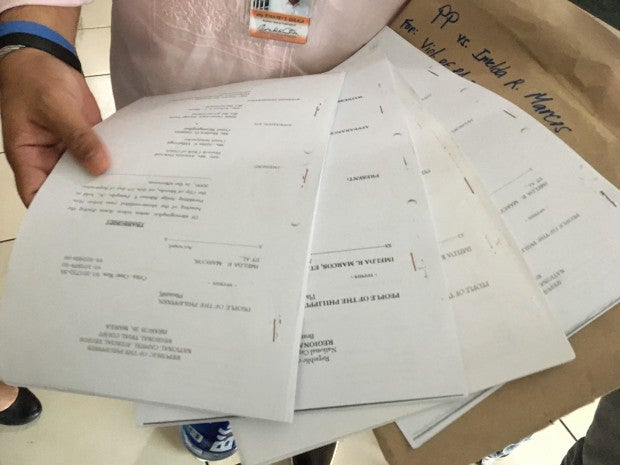 The prosecution had sought the said document for the past few months, but as Lagos noted during Tuesday’s hearing, the “request is still left hanging.”

Sison previously skipped the hearings set on Jan. 17 and Feb. 27.

In response to a show-cause order, the lawyer explained that he failed to attend the Jan. 17 hearing because of a “domestic incident” that morning that “primarily caused this representation’s blood pressure to shoot up.”

He said his first absence was “not deliberate and never intended to defy the order of the Honorable Court.”

The Sandiganbayan criminal cases have crept slowly since they were filed from 1991 to 1995. (Special Prosecution Officer Teresita V. Diaz-Baldos, who filed the 1991 charges, finished a 13-year stint as Sandiganbayan justice last July without seeing the conclusion of Marcos’ trial.)

Marcos, whose extravagant lifestyle led to the coining of the word “imeldific,” is accused of violating Section 3(h) of the Anti-Graft and Corrupt Practices Act, which bars public officials from having financial interest in transactions prohibited by the Constitution.

While serving as a member of the interim Batasang Pambansa and later the Minister of Human Settlements, she was allegedly involved in several foundations and business establishments set up to accumulate ill-gotten wealth, some of which was stowed away in Swiss bank
accounts.

The Duterte administration in November allowed the sneak burial of the remains of her husband, dictator Ferdinand Marcos, at Libingan ng mga Bayani. SFM