newsinfo / Nation
Nation
DON'T REBUKE THE KIDS, DEAL WITH ME 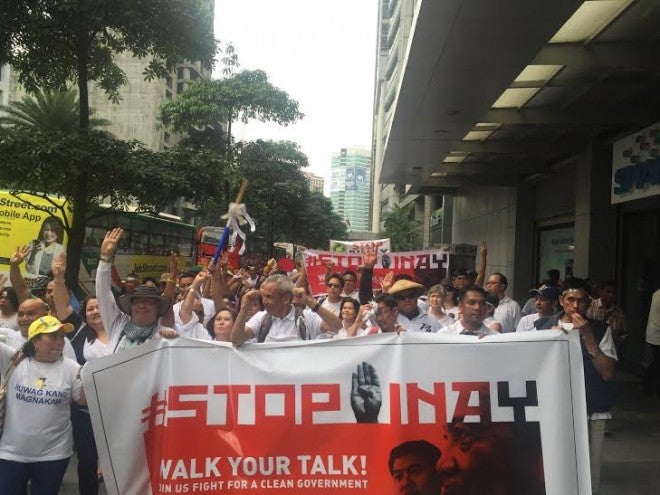 Protesters lead by musician-writer Jim Paredes (center with gray hair) and other members of the civil society reach Ayala Avenue in a rally called Stop Binay walk. They urge Vice President Jejomar Binay not to run for President in 2016. NESTOR CORRALES

Solicitor General Jose Calida challenged Jim Paredes, a vocal critic of President Duterte, to face him and call him a coward as he lauded the members of Duterte Youth “for standing up for what they believe in.”

A video of Paredes confronting members of the Duterte Youth during a rally commemorating the Edsa People Power went viral on social media. The musician questioned their support for Duterte despite the rising number of deaths under the government’s drug war.

“I invited them because we are supporting them as defenders of the Republic of the Philippines,” Calida said in a press briefing on Monday.

Also present during the briefing was lawyer Lorenzo Gadon who said he was willing to represent the Duterte Youth should they decide to pursue a case against Paredes.

“Now, Jim Paredes, look at me. Don’t rebuke the children. Look for a person of your age. You call them cowards. You try telling me I’m a coward,” Calida said.

Calida said the Republic Defenders group was a private organization where he is the “godfather.”/ac