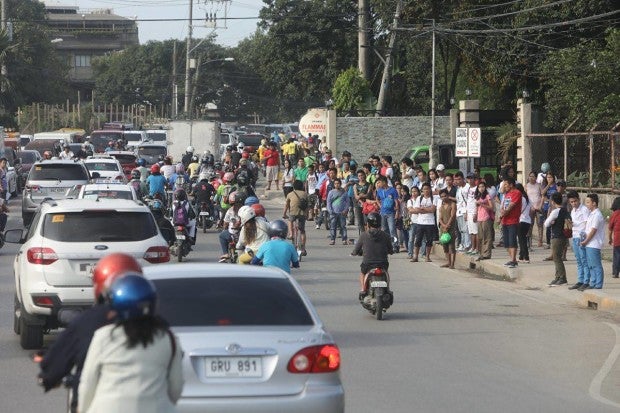 Stranded passegers wait to get a ride in Barangay Maguikay in Mandaue City, Cebu after jeepney drivers went on strike on Monday. TONEE DESPOJO/CDN

CEBU CITY — It usually takes a few minutes to take a jeepney ride from Nasipit in Barangay Talamban, Cebu City, to Mandaue City, but not on Monday morning.

Ryan Abella, 26, an office clerk, had been standing on the road in Nasipit for more than an hour but could not get a ride that would take him to work in Barangay Subangdaku, Mandaue.

He said he was supposed to clock in for work at 8 a.m. but it was already 8:06 a.m. and there was not a jeepney in sight.

Abella said he would continue to wait for a ride and would just explain why he reported late for work.

More than an hour later, Ramos was still waiting to get a ride.

“I might take a half day if I won’t get a ride this morning,” said Ramos, a human resources coordinator.

Abella and Ramos were among the hundreds of passengers who were stranded after jeepney and tricycle drivers went on strike to protest the planned phaseout of jeepneys 15 years old and older.

Traffic Enforcement Agency of Mandaue (TEAM) chief Glenn Antigua said that a surge of commuters was observed starting at 5 a.m.

He said they deployed at least seven vehicles to ferry stranded passengers.

Antigua said the buses collected a flat rate of P10 for every commuter. CBB/rga