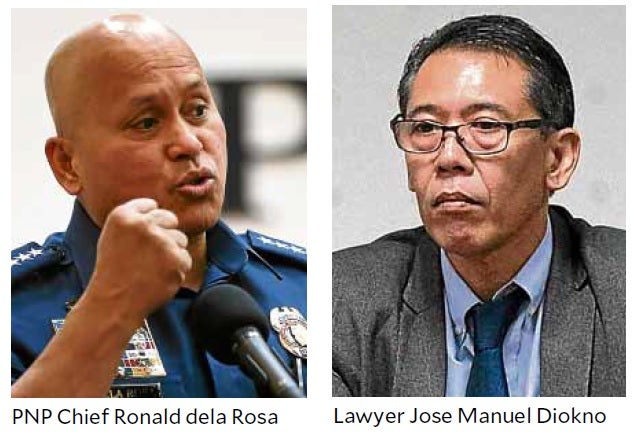 In the operational guidelines issued by Philippine National Police Director General Ronald dela Rosa on how the PNP would conduct the Duterte administration’s war on drugs, one word repeatedly comes up: “neutralization.”

“It is the only circular of the PNP that I know that uses the word ‘neutralization’ five times and uses the term ‘negation’ twice in reference to illegal drug personalities,” Diokno said at the DLSU forum on the war on drugs and human rights last week.

Some 7,000 drug suspects have been killed since President Duterte ordered a campaign against illegal drugs, a move denounced by international and local human rights activists but widely supported in public opinion surveys in the Philippines.

‘No counterpart in law’

Diokno said the term “neutralization had no counterpart in law.” He noted that the circular did not call for the arrest of drug personalities.

“It does not call for their prosecution or conviction but their neutralization and in police parlance, neutralization only means one thing. And that is to kill,” Diokno said.

“If people [tell] me, the government is not sanctioning war on drugs; it is not allowing extrajudicial killings—I have a very short and simple answer to them. Just open PNP Circular 16-2016 and you will see that it does expressly authorize the taking of the law into their hands and the killing of people without the benefit of any due process,” Diokno said.

“Let him define what neutralization means. For us, there’s nothing illegal or unlawful in that memo,” Carlos said in a phone interview.

“That’s his interpretation [but] it does not mean to kill, nothing like that. We are just following a legal and lawful command,” he said.

Since the Duterte administration assumed office in July 2016, the PNP have admitted killing 2,500 alleged drug offenders in a campaign dubbed “Oplan Tokhang.” The PNP has insisted the killings were done in “self-defense” after suspects violently resisted arrest.

Another 4,500 killings have been classified as “deaths under investigation,” which the PNP has blamed on drug syndicates’ “internal cleansing” and on vigilante groups.

The 18-page memorandum, which contains the detailed operational guidelines in carrying out the Duterte administration’s war on drugs, is on the PNP website.

In his “Coordinating Instructions,” Dela Rosa orders “strict” compliance of protocol in the conduct of the illegal drug operations, which includes coordination with the Philippine Drug Enforcement Agency (PDEA).

He says all antidrug operations must be conducted “with due observance of human rights” and “shall conform” with the Dangerous Drugs Law, the rules of court, and “strictly observe the rights of the accused enshrined” in the Constitution as well as international laws.

In his instructions, Dela Rosa emphasizes that police officers must observe the rights of those arrested, detained and under investigation.

On Page 16, he mentions “Focus Teams” that would “neutralize high-value and street-level targets to include their support systems (drug lords, their protectors, coddlers and supporters).”

On Page 2, Dela Rosa explains that the memo sets the general guidelines for the government two-pronged—or “double barrel”—approach to the war on drugs, namely Project Tokhang and Project HVT. The former is for the barangay level while the latter aims to target big-time drug syndicates.

Explaining the campaign implementation on Page 3, he says: “The PNP intends to equally address illegal drug problems in the barangays and at the same time pursue the neutralization of illegal drug personalities as well as the backbone of illegal drug networks operating in the country.”

On Page 12, Dela Rosa directs the PNP Intelligence Group to “assist in the neutralization of drug groups/personalities and PNP personnel who are involved in illegal drug activities.”

On Page 15, the PNP chief directs regional, provincial, city and municipal offices to “conduct intensified anti-illegal drug operations through the respective chiefs of police and the anti-illegal drug units in the clearing of the drug-affected barangays by focusing on the neutralization of street-level drug personalities in the AOR (area of responsibility).”