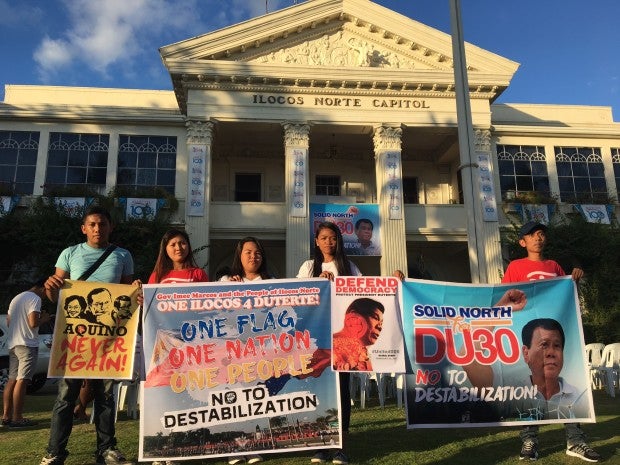 Hundreds of President Duterte’s supporters, composed of students, volunteers and government officials, lit candles and prayed for the President in a Feb. 25 rally in Laoag City in Ilocos Norte province. It coincided with a pro-Duterte march in Metro Manila and other areas in the country. PHOTOS BY LEILANIE ADRIANO

LAOAG CITY—Hundreds of Ilocanos gathered here on Saturday, describing the 1986 Edsa People Power Revolution as “fake” and decrying what they said were attempts to destabilize the Duterte administration.

They assembled at the request of Gov. Imee Marcos.

Ilocanos in their 20s and Marcos loyalists gathered in front of the Ilocos Norte capitol, hours after the governor made the appeal.

She, however, was absent in a candle-lighting ceremony and prayer rally. Freddie Aguilar’s “Para sa Tunay na Pagbabago Duterte,” the President’s campaign song, played in the background.

Describing the 1986 revolt as a “fake revolution,” Herdy Yumul, 38, a sociology professor, exhorted protesters to protect the Duterte administration.

Mr. Duterte was trying to “undo the problems fueled by the Yellows but there is a clear threat to his presidency,” Yumul said.

He added that “it is high time that we stay vigilant and let our President know we support him.” Yellow referred to the color of the nonviolent protest led by the late President Corazon Aquino that ousted the late dictator Ferdinand Marcos in 1986.

“The Philippines terribly suffered from the hands of leaders who were antipoor. The economy continued to suffer. Peace and order deteriorated. Basic social services, including health and education, spiraled down. Marcos is long dead but social ills persist,” Yumul said. —LEILANIE ADRIANO