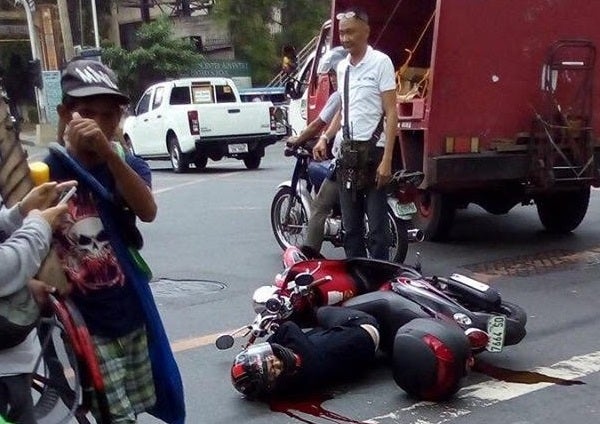 A still unidentified gunman shot and killed a 27-year-old information technology professional after a road altercation in Quezon City on Saturday afternoon.

Witnesses said the gunman, who drove a white Toyota Land Cruiser with license plate AHA 3454, immediately sped off after the incident. He was described as 35 to 40 years old.

Eleazar said they were trying to establish the identity of the driver while verifying the owner of the vehicle from the Land Transportation Office (LTO).

The victim’s older brother, Michael, who was backriding on the motorcycle, told the police that Mendoza and the driver of the Land Cruiser had an altercation before the shooting.

Citing Michael’s account, Eleazar said the brothers had just come from buying a car part from Banawe Street when they stopped at the intersection.

The white Land Cruiser arrived and almost hit the motorcycle, which prompted Mendoza to call the attention of the sports utility vehicle’s driver.

A heated argument ensued during which the car driver pulled a gun and shot Mendoza.

The victim suffered gunshot wounds on the left side of the face and back of the head. He died on the spot.

Scene of the crime operatives recovered a bullet casing at the crime scene.

The suspect fled along Quezon Avenue.

Mendoza’s family and friends took to Facebook their dismay and regret, as they sought justice for the slain Mendoza, who was about to get married.

“He is very patient and kind; he could not start the altercation, but if ever he did, it’s not a reason for the suspect to kill him,” Gorgonio said.

“We were all shocked. He was supposed to meet his girlfriend in Singapore this March,” she added, hoping justice is served.

Eleazar lamented that the LTO office was closed on Sundays, saying a hot pursuit could have been possible.

He cited a similar incident along V. Luna Avenue, involving a hummer driver killing a motorist, also happened on a weekend.

“The police had the plate number but we couldn’t verify the owner,” Eleazar said.

Eleazar urged those who have information about the suspect vehicle to immediately inform the Quezon City Police District headquarters in Camp Karingal. CBB/rga

Read Next
No. 2 most wanted in Mimaropa arrested in Quezon
EDITORS' PICK
Kalinga, Ifugao, Mt. Province, N. Samar will be under Alert Level 4 from Jan 21-31
Gear up and get ready to play with Yamaha Mio Gear
Mobile COVID-19 vaccination for commuters, transport workers set at PITX
Acer starts the year off strong with the Aspire Vero National Geographic Edition
Municipal court in Pangasinan sets arraignment for ‘Lolo Narding’
31,173 new COVID-19 cases push PH’s active tally to 275,364
MOST READ
Imelda Marcos trends on Twitter after octogenarian jailed for allegedly stealing mangoes
SSS: Members on home quarantine due to COVID-19 can apply for sickness benefit
Villar backs implementation of EDSA decongestion blueprint
Help pours in for octogenarian jailed for ‘stealing’ mangoes in Pangasinan
Don't miss out on the latest news and information.