Millennials on Edsa: Celebrating ouster of a dictator, facing threat of another | Inquirer News

Millennials on Edsa: Celebrating ouster of a dictator, facing threat of another 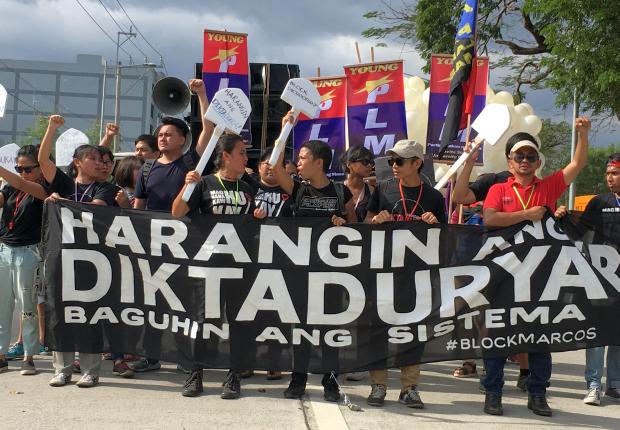 Members of the Young PLM (Partido Lakas ng Masa) were among those joined the 31st anniversary celebration of the 1986 People Power Revolution. (Photo by DEXTER CABALZA/Philippine Daily Inquirer)

No way, said a group of protesters, mostly millennials, who staged a program commemorating the Edsa People Power revolt in 1986 at the gates of the cemetery where the toppled dictator lies.

About 60 members of the Freedom from Debt Coalition and Block Marcos, composed mostly of youths in their 20s, trooped to the Libingan ng mga Bayani (LNMB) in Taguig about 12:30 p.m. Saturday, where they were blocked off by hundreds of antiriot police officers.

Three months after former President Marcos was buried “like a thief in the night,” the Block Marcos group continued rallying their call “to exhume the dictator, murderer and plunderer.”

A streamer with an image of a shovel and the words “Hukayin (Exhume)!” suspended in the air with around a hundred balloons were brought at the gates of the heroes’ cemetery.

On the 31st anniversary of Edsa People Power, Block Marcos spokesperson Kat Leuch called out to the public not to forget the atrocities during two decades of the Marcos regime just because he had already been buried.

“We should not move on from history. It should always be remembered and studied, so people may learn from it,” Leuch, a law student at the University of the Philippines Diliman, said.

“Today we will celebrate the ouster of the dictator,” she said. “But we must also continue and escalate the struggle against the threat of a new dictatorship.”

Leuch was referring to President Rodrigo Duterte’s actions, which she said “are everything the Edsa People Power fought against.”

“Duterte’s order to have Marcos buried at the LNMB is part of the government’s systematic attempt at historical revisionism – an effort to condition people into thinking that there’s nothing bad with dictatorship and hence to create the ground for the popular acceptance of authoritarianism,” she said.

The group also assailed the arrest of Sen. Leila de Lima, a staunch critic of the President, on Friday on drug-related charges over her role in the illegal drug trade at the New Bilibid Prison when the senator was the justice secretary.

“These arrests will have a chilling effect on civil society,” Leuch said. “They are clearly intended to send the message: speak out and the whole repressive apparatus of the state (the police and the military) will be used against you.”

The protest ended past 3 p.m.

The group will converge with other protesters at the People Power Monument in Quezon City. /atm